Chuck Schumer Loses It – GOES OFF on Trump Supporter [VIDEO]

Sounds like Chuck-you Schumer[1] lost his cool Sunday night at a very upper crust restaurant in Manhattan. He went off on a very wealthy and well-connected Trump supporter. Schumer was screaming… and I do mean ‘screaming’… that President Trump was a liar. He was having dinner with friends when he ran into Joseph A. Califano Jr. — the former U.S. secretary of health, education and welfare under President Jimmy Carter and domestic policy adviser to President Lyndon B. Johnson — and his wife, Hilary. Joseph is a Democrat and a big one. His wife Hilary voted for President Trump and this sent Schumer into a freaking rage. Nice.

Schumer even followed the couple out of the restaurant who had their quiet dinner ruined by this putz and kept yelling at them outside on the sidewalk. Wonder if he had a few drinks before that? He demanded to know how Hilary could have voted for Trump and kept screaming he was a liar. Schumer made a fantastic scene and everyone ran for cover. I feel sorry for that couple… they couldn’t get away from Chuckie fast enough. 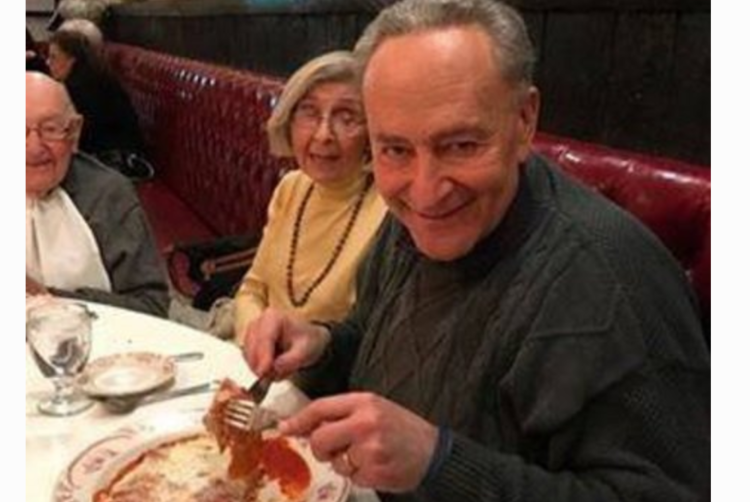 Sen. Chuck Schumer, D-N.Y., caused a scene at a Manhattan restaurant when he began yelling at a wealthy and well-connected Donald Trump supporter that the POTUS is “a liar.”

Schumer, the top Senate Democrat, lost his cool on Sunday night at Upper East Side restaurant Sette Mezzo, according to witnesses.

He was dining with friends when he encountered Joseph A. Califano Jr. — the former U.S. secretary of health, education and welfare under President Jimmy Carter and domestic policy adviser to President Lyndon B. Johnson — and his wife, Hilary, who were having a quiet dinner.

Onlookers said Schumer was incensed that Hilary — the daughter of William S. Paley, the founder and chairman of CBS — had voted for Trump, even though her husband, Joseph, is a well-known Democrat.

One witness said of the restaurant rant, “They are a highly respected couple, and Schumer made a scene, yelling, ‘She voted for Trump!’ The Califanos left the restaurant, but Schumer followed them outside.” On the sidewalk, Schumer carried on with his fantastical filibuster: “ ‘How could you vote for Trump? He’s a liar!’ He kept repeating, ‘He’s a liar!’”

Hilary confirmed the confrontation, telling Page Six, “Sen. Schumer was really rude… He’s our senator, and I don’t really like him. Yes, I voted for Trump. Schumer joined us outside and he told me Trump was a liar. I should have told him that Hillary Clinton was a liar, but I was so surprised I didn’t say anything.” Wow. You have to wonder how these entrenched Democrats keep getting elected when everyone hates them so much.

Now, for the revisionist version… Another diner insists that Califano and his wife approached Sen. Schumer’s table. The diner said, “It was a pleasant conversation. Joe said the senator was doing a good job on health care. Joe joked that Hilary voted for Trump. The conversation continued outside because everyone left at the same time.” I highly doubt that. But who knows? I wasn’t there. Let’s just say that it would be ‘in character’ for Schumer to do something like this.