The book Clinton Cash is really proving the Clintons to be some of the most corrupt individuals in recent history and even The New York Times is catching them at their lies. In one case the Clintons insisted that Bill never met with a Russian Uranium company official until forced to admit the truth when photo proof was presented to them. 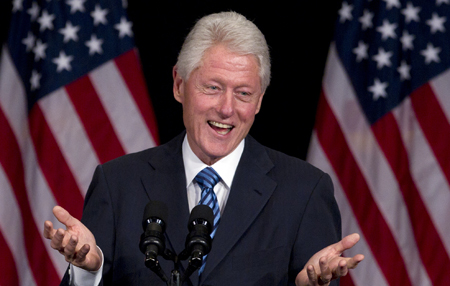 A NYT reporter asked the Clintons about the meeting, but the Clintons lied[1] and told her no meeting never took place. But…

In a Fox News preview of “The Tangled Clinton Web,” a New York Times reporter accused the Clinton Foundation of lying to her about a meeting Bill Clinton had with Kazatomprom[2] officials regarding the sale of uranium to Russia.

“When I first contacted the Clinton Foundation, they denied any such meeting ever took place. And when we told them we have already talked to the head, who not only told us all about the meeting but actually has a picture of him and Bill at the home, that he proudly displays on his office wall, they then acknowledge the meeting had taken place.”