CNN’s ‘A Team’ Rather Do Hurricane Coverage Than RNC Convention 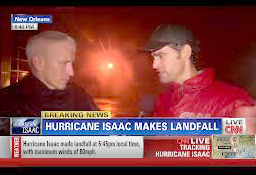 Something interesting to note about the front half of this week’s coverage of the news over at CNN is that the network’s A team reporters — Soledad O’Brien and Anderson Cooper[1] — have for the most part eschewed the GOP convention preferring to stand in the winds of hurricane Isaac rather than be faced with covering Republicans.

For most reporters, when they are told they are doing storm coverage, it consists of standing in the rain and winds to yell into a mic about the wrath of Mother Nature. And it’s usually considered an unwelcome assignment, too.

Think about on-site weather coverage by your local TV news station and you’ll recall that the correspondents that are standing in the wind and rain are never the A team news anchors. As the A team is always sung as a bug back at the studio, usually it’s some low ranking reporter or reporterette — the ones always doing the 100 birthday stories or the lost dog stories — that are sent out to stand in the harsh weather.

But not CNN. No, this week two of CNN’s top talents were the ones standing in the churned surf and 100-mile-per-hour winds to report about hurricane Isaac, a job usually given to reporters on the lowest rung.

One has to wonder, would Anderson Cooper and Soledad O’Brien rather face the wrath of a hurricane than face the Republican point of view?

Or, perhaps it’s something a little different. Maybe CNN’s A team was literally in the eye of the storm because CNN had hoped that there would be death, destruction and devastation of minorities and the cabler wanted its A team on the ground and ready to exploit the pain of minorities instead of covering the news of the convention in nearby Tampa?

After all, if the A team could be seen “reporting” the pain of minorities while the GOP convention was going on, why, that would be the perfect split screen contrast as far as CNN is concerned. And, we can think this a likely scenario, too, because during the early part of Tuesday’s coverage of the convention, there was indeed a split screen of hurricane images and the RNC convention.

In fact, even CNN’s voiced over promo of convention coverage had a portion saying that the hurricane posed a problem to the GOP.

CNN was completely ready and hopping for destruction by the hurricane to be juxtaposed with happy Republicans at their convention. This wasn’t just CNN’s idea, either, as evinced by ABC’s David Chalian who was heard on an open mic saying that Republicans were happy to party while black people die[2] from the storm. Obviously this opinion is pervasive among members of the Old Media establishment.