This incident in Philadelphia is what concealed carry is for, folks, and why it is a good idea. A man with a concealed carry permit and his trusty firearm stopped an armed robbery last week taking out two robbers. 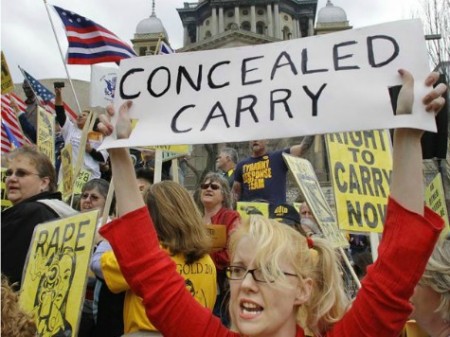 Unfortunately, the bad guys got off at least one shot and killed an innocent person. But BOTH robbers were hit[1] and so far one is duly dead. But the CC holder got away with his life and wallet intact.

One of the two men who were the targets of the robbery was an armed concealed carry permit holder.

“Unbeknownst to the robbers, the 27-year-old victim has a permit to carry…has his handgun with him,” Police Lieutenant John Walker says.

The concealed carrier’s friend was shot by one of the robbers during the exchange of shots, after the robber was shot.

All three men were rushed to an area hospital in critical condition. One of the robbers and the injured victim both died. The remaining robber remains in serious condition at the hospital.

At this time the incident is under investigation, and no charges have yet been filed against the surviving robber. No charges are expected against the concealed carrier.

Yes, let us hope the second robber dies soon, too. YES, I SAID IT!