Dancing With The Haters: DWTS Slam on Tea Party (Updated With Video)

Even Dancing is not safe from left-wing attacks on Tea Partiers, sadly. Tonight on the venerable dance show, fashion makeover maven Carson Kressley[1] thought it would be a hoot to make fun of over half the voters in America with an attack on how he thinks Tea Party activists smell. 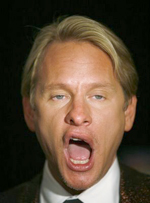 On tonight’s Dancing With The Stars[2], funny guy Carson Kressley hit the screen wearing a gorilla mask. Taking it off he snarked, “It still smells like a Tea Party.”

So, what are we to make of this nonsense? Is Kressley saying that Tea Party activists smell like gorillas?

Are we supposed to be laughing at that, now?

So, what do Democrats smell like? Maybe Europeans? How about reds?

I wonder what dance partner Anna Trebunskaya, who was born in Russia, thinks about that? I wonder how ABC will take attacking so much of its audience?

Whatever Anna or ABC thinks of it the bigger questions is, what do you Tea Partiers think? Maybe you can ask ABC[3] yourself?