CNN’s Candy Crowley, the so-called moderator of the second presidential debate for the 2012 elections, misled 60 million viewing Americans in the debate when she wrongfully sided with Obama against Mitt Romney when Romney maintained that Obama refused to call the attacks on our Libyan embassy an act of terror in his Rose Garden address on the incident the day after it occurred. 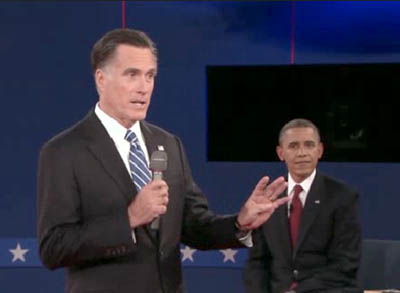 During the section on Obama’s abject failures on foreign policy, Romney was making the point that Obama took many days before he finally started calling the attacks on our Benghazi embassy an act of terror. But as he was making this point, buttinski Crowley sided with Obama telling Romney he was wrong.

In his reply to Romney, Obama said directly on that stage that he did call the attacks “an act of terror.” This caused Romney to press the point that Obama wasn’t telling the truth.

Romney pressed the point a bit, but Crowley jumped in insisting Obama did call the attack an act of terror. Suddenly doubting himself for Crowley’s attack on his point, Romney let it pass.

While it is true that Obama used the mere word “terror” he absolutely did not say that the attack on the embassy itself was an act of terror.

In his September 12 address[1] delivered from the Rose Garden, Obama used the word terror but once.

No acts of terror will ever shake the resolve of this great nation, alter that character, or eclipse the light of the values that we stand for. Today we mourn four more Americans who represent the very best of the United States of America. We will not waver in our commitment to see that justice is done for this terrible act. And make no mistake, justice will be done.

Notice Obama talked about “acts of terror” but only in general terms. He did not state unequivocally that the Benghazi incident was, indeed, such an act.

After butting into the debate so often and especially on this question, after the debate Crowley finally admitted that she didn’t handle that very well.

The left-wing Crowley, though should have just shut her mouth in the first place. Her job was not to interject her own opinions or to try and sound like the smartest person in the room.

Referees in sports, for instance, don’t berate the players for not handling a play well. They don’t debate with the players how they should have done it. They just make sure everyone follows the rules and other wise they stay out of the way.

Crowley did a horrible job. Period.

All in all, a wash. The only one that did badly was loud mouth Crowley.