Deciphering Susan Rice Without Being Racist 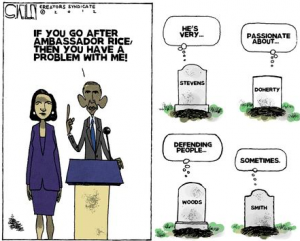 I’m almost at the mark! I’m so excited. : I just have one more jar of Ovaltine to drink before I’m able to send in my application for the James Clyburn Racial Code Word Decipher. : It’s going to be useful — as we all try to make sense of the various racial code wards that have been hurled at Ambassador Susan Rice for her less than adequate job performance.

Racism is, and will always be, an effective tool employed by liberals. : Racism is anathema to American society. : So, when one person cries racial discrimination — Blacks, Whites, Asians, and Martians come out of the bushes, like perverted voyuers, to listen. : Additionally, the person who has been accused must explain how they aren’t racist to the public. : In politics, that’s perfect. : One candidate hammering away at the opposing side’s economic record, like in the case of Mitt Romney and Barack Obama, is inhibited from continuing to do so once the racism accusations start flying.

In the case of Ambassador Rice, she’s been accused of being ‘incompetent’ and ‘lazy’ from Republicans. : Democrats say that’s racist and sexist. However, no one dares think about the alternative situation where a Republican Ambassador to the UN would have been chastised heavily from Democrats — and rightfully so. : There’s no excuse to misled the American people on the Sunday morning talk shows.

Concerning Rep. Clyburn, this is how he: frames the whole situation[2]:

“You know, these are code words,” Clyburn said. “We heard them during the campaign. During this recent campaign, we heard Senator Sununu calling our president lazy, incompetent–these kinds of terms that those of us, especially those of us who were grown and raised in the South, we would hear these little words and phrases all of our lives, and we’d get insulted by them.”

The Washington Times’ Kerry Picket noted this as well[3]. : In fact, she even went into the past, and dug up liberal accusations of incompetence that were thrown at then-Secretary of State Condoleezza Rice. : Of course, you have to cite the worst of the worst, which is what Picket did quoting left-wing blowhard and editor of The Nation Katrina Vanden Heuvel — who wrote in November of 2004[4].

Last July, the Washington Post devoted much of its front-page to a well-reported story indicting National Security Adviser Condoleezza Rice for her role in misleading Congress and the public in the run- up to the Iraq war. The bottom line: Rice was either incompetent or a liar.

Even sources described as “generally sympathetic” to the NSC adviser questioned her many shifting and contradictory statements regarding Iraq’s alleged uranium purchase and the WMD (non)threat. But Rice’s dogged loyalty to Bush served her well, and she stayed put.

Gasp! Ms. Vanden Heuvel — that’s racist! : However, this plays into the mindset of liberals, which is conservative women, especially those who are minorities, aren’t really people. : They’re the confused ‘others’ wondering through the woods, and looked down upon as semi-mentally retarded. : It’s how liberals view most people who aren’t of the liberal persuasion. : Hey, some people like to work hard, and pay taxes — I don’t blame them.

This perverse untermenschen category liberals have for conservative women extends to their affiliates in the D.C. non-profit and lobbying circle with groups like NARAL Pro-choice America and the National Organization of (some) Women. : As far as I’m concerned, conservatives should continue to hammer away at Ambassador Susan Rice, and do everything possible to block her nomination for Secretary of State.

Originally posted at The Young Cons.[5]