Well, well, well…[1] just as we all suspected… Marilyn Mosby’s office was withholding evidence. And to top that off, Freddie Gray had previously tried to injure himself during an arrest. No wonder the defense is filing misconduct charges. Mosby must have a leak or three in her merry band of racists as well. Trial by ambush, indeed. Mosby not only tried to sway those charging the officers to beef up the charges, she had a private meeting with the pathologist before the autopsy. In their filing last week, the defense attorneys said prosecutors have withheld “multiple witness statements from individuals who stated that Mr. Gray was banging and shaking the van at various points” after his arrest on April 12th, as well as “police reports, court records, and witness statements indicating that on prior occasions, Mr. Gray had fled from police and attempted to discard drugs.” No comment from Mosby except to say that the defense attorneys were given everything they were entitled to. Mosby should be removed from this case, in fact, she should be disbarred for her actions. 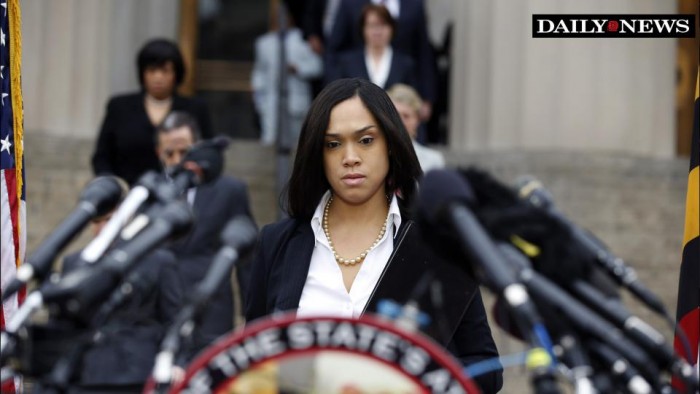 In a motion filed Thursday, they allege that the Baltimore State’s Attorney’s Office has intentionally withheld evidence favorable to the defense, in violation of all legal and ethical standards, according to the Baltimore Sun[3].

They say that part of the evidence withheld was that Gray had attempted to injure himself in the past while in police custody. The Sun reported:

“Based upon information and belief, the State’s Attorney’s Office was informed of this fact, yet failed to disclose to the defendants any statements, reports, or other communications relating to this information,” the defense counsels wrote in a motion to the court.

Gray, a 25-year-old Baltimore man with a history of arrests, died in April after suffering a severe spinal cord injury in a police van. Six officers who were involved in his arrest and transport on April 12 have been charged with violations that range from misconduct in office to second-degree murder.

All of the officers have pleaded not guilty; a trial date is set for October. In the meantime, prosecutors and defense attorneys have been battling through pretrial motions and other filings.

In their filing Thursday, the defense attorneys said prosecutors have withheld “multiple witness statements from individuals who stated that Mr. Gray was banging and shaking the van at various points” after his arrest April 12, as well as “police reports, court records, and witness statements indicating that on prior occasions, Mr. Gray had fled from police and attempted to discard drugs.”

Defense attorneys noted in their filings that their list of allegations against prosecutors “is not all-inclusive, and any inaccuracies fall squarely at the state’s door.”

The evidence — including what was said between prosecutors and [Carol] Allan, the medical examiner — could also raise questions about the actions of Mosby and other prosecutors, they said, supporting an argument that they be removed from the case.

“They blurred the line between witness, investigator, and attorney during the pre-charging phase of the investigation. This was not a ‘get ready for trial’ meeting; rather, this was a meeting which took place before the cause of death was even determined,” the defense attorneys wrote in their pleadings.

“This meeting puts the state squarely in the center of the circumstances leading to Dr. Allan’s opinions — they are essential witnesses.”

A spokeswoman for Mosby declined to comment, the Sun reported.

The defense motion was the subject of an “On The Record” segment with Fox News host Greta Van Susteren and her legal panel.

Former defense counsel Ted Williams called the allegations “amazing,” and Van Susteren surmised that someone in the prosecutor’s office must have leaked information to the defense team.

Former prosecutor Katie Phang called Mosby’s tactics “trial by ambush,” which she said “does not exist anywhere in the United States.”

Defense attorneys said that Mosby was informed that the knife she claimed was legal was in fact spring-assisted. That makes it an illegal weapon in her jurisdiction and proves that the officers had every right to arrest Gray. I would wager virtually all the charges against those officers are without merit. The defense went onto say that they had “been forced to spend hundreds of hours collectively investigating the State’s violations in order to understand the full breadth of the harm. While the defense has now obtained some of this evidence through its own sources, the defense has no idea of what else the State has failed to disclose.” Plenty I bet. They asked the Circuit Court to sanction prosecutors in Mosby’s office for the withholding of evidence and immediately recuse themselves from the case and compensate the attorneys for work performed. They also demanded all evidence be turned over to them as it should have been. All of those are legitimate requests. Mosby knew the facts and the truth from the beginning – she went on a witch hunt for those officers purely for political reasons.