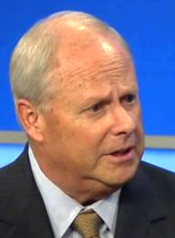 New Hampshire GOP establishment has foisted Walt Havenstein on the state as the Republican candidate for Governor. But, typical of these establishment types, it seems that they have more contempt for people on their own side than they do for the real enemy; the Democrats. Havenstein, for instance, calls you Tea Partiers the disgusting name “teabaggers.” Not only that but he refuses to apologize for his slander.

Havenstein was recorded on video[1] calling members of the Tea Party “teabaggers” at talk he gave a few years ago at the University of Maryland’s Robert H. Smith School of Business.

Now, one might note that this speech was a few years ago, sure. Maybe Havenstein has changed his mind, maybe he was just trying to be “funny,” maybe he really doesn’t hate conservatives?

Well, Mr. NH Establishment was given a chance to repudiate his slanderous name-calling of conservatives just this week and guess what? Skip Murphy, the co-founder of the NH TEA Party Coalition and a well-known local political operative, confronted Havenstein at a campaign stop, and gave the candidate a chance to walk back his slanderous comments, but Havenstein refused to take it back[2].

So, once again we have a Republican Establishment Stooge who hates people on our own side more than he hates leftists. Walt Havenstein hates conservatives more than he hates those leftists destroying these United States of America.

Now tell me… why do we support the Republican Party, again?