Delusional: Pelosi Claims Iran is Free to Do Whatever They Want with $150B… Including Terrorism

I think that Nancy Pelosi[1] suffers not only from one too many face lifts, but a lifetime of evil intent. She went on CNN and told them that the $150 billion being given to Iran is their money to do with as they see fit. In point of fact, it may be their money, but it was frozen under sanctions for a reason. She knows full well that money will be used in making nuclear weapons and to kill innocent people via terrorism. Iran is the largest purveyor of terrorism on the planet and Obama and the likes of Nancy Pelosi have just funded them to commit unspeakable acts. She has no compunction about signing the death warrants for millions of innocent beings, but Americans exercising their constitutional right to bear arms? That won’t be tolerated! This woman is delusional and she is the one that leads the Democrats. It’s clear her evil and corruption is not just skin deep. 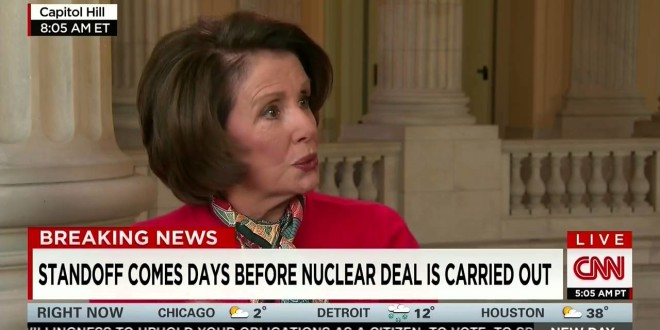 House Minority Speaker Nancy Pelosi gave a response to CNN Chris Cuomo that will leave you thinking she is incoherent or mentally just losing it!

If I heard her well and I listened to the video a couple of times, the money ($150B) the Obama administration is releasing to Iran is their money so whatever they do with their money is their business. What a maroon! This lady has lost it!

I especially relish this tidbit of insanity: “They have been doing bad things with the money that they had. But the fact is the biggest threat to all of us is that Iran would have a nuclear weapon. We have taken them off that course. How much is that worth? Of their own money?” The craven stupidity of that particular statement is simply stunning. Just what does this moonbat think they’ll use that money for? Enlightenment? Hardly. The Dems haven’t taken Iran’s nuclear ambitions off course. They’ve sped them up exponentially. Obama grovels and apologizes before the mullahs and gets absolutely nothing in return. America has become subservient to the Iranian regime through Obama and that must stop if we are to survive. That money will be used to strike not only Israel, but America. You want to know how much that nuclear deal is worth, Nancy? Everything we have in an apocalyptic sense, that is.