Well, looky here… another lying political sack of excrement. I give you Rep. John Conyers. I wrote earlier today on how he settled with one female employee for $27,000 to hush sexually harassing her. He used a slush fund in Congress paid for with our tax dollars to do it too. Then he claimed the settlement never happened… over and over again. Now, he’s changed his story and says the settlement happened, but there was no sexual misconduct. Right.

“JUST IN: Rep. John Conyers retracts earlier statement to AP, says he was surprised and confused about which allegations. He confirms a settlement but denies the allegations,” tweeted BuzzFeed’s Paul McLeod. So, there are so many allegations, he got confused? Good to know. This is a guy that had assistants arrange travel for women to have sex with him. He asked a staffer to ‘touch it’, if you get my drift. The guy is a slug and should be kicked out. Nancy Pelosi has called for a Congressional investigation. That’s lame. Eject the SOB and be done with it already. 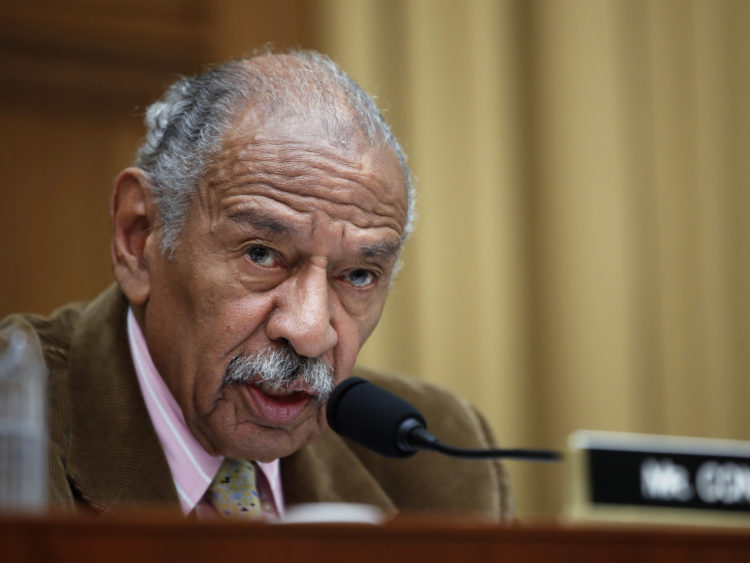 In a statement to POLITICO., Rep. Jerry Nadler (D-NY) said, “The allegations against Ranking Member Conyers are extremely serious and deeply troubling. Obviously, these allegations must be investigated promptly by the Ethics Committee.” Which probably means it will never go anywhere. Speaker Paul Ryan called allegations against Conyers “extremely troubling.” Rep. Bill Huizenga (R-MI) was the first member of Congress to call for Conyers to resign. Mike Cernovich broke this and gave the documents to BuzzFeed who ran with the story. Give credit where it is due. Nice job.

Former staffers also said that Conyers made it very clear that if they performed ‘personal favors’ it would lead to salary increases and promotions. It was well known that Conyers, 88, was having affairs with multiple female staffers. He often made sexual advances towards women and grew angry if they brought their husbands around. Women were forced to work late and on the weekends so he could be around them.

Conyers is no stranger to corruption. From Politico:

In 2016, Conyers came under investigation by the Office of Congressional Ethics for paying his former chief of staff, Cynthia Martin, for six months after she pleaded guilty to receiving stolen property, a misdemeanor. Conyers refused to cooperate with the OCE probe.

In 2009, Conyers’ wife Monica — then president of the Detroit City Council — pleaded guilty to accepting bribes and was sentenced to 37 months in prison.

And in 2006, Conyers came under investigation by the Ethics Committee for allegedly using his staff for personal errands, including babysitting his children. No formal action was ever taken against him by the panel.

The Democratic jackals are now lining up to take his place.

It’s amazing how Conyers gets away with lying like this. He’s not senile or confused either. He’s a predator and a sexual deviant. Conyers is the ranking member of the House Committee on the Judiciary and should be removed from that position immediately for lying if nothing else. He hasn’t apologized in the least. The arrogance of this bastard is staggering.

Known as the “Dean of the House,” Conyers is the longest-serving current House member and one of the most prominent African-American lawmakers in Congress. This scandal is rocking House Democrats and there is going to be fallout from it. What that exactly will be, we’ll have to see. This is far from over.

JUST IN: Rep. John Conyers retracts earlier statement to AP, says he was surprised and confused about which allegations. He confirms a settlement but denies the allegations. pic.twitter.com/Feql2CwuYp[5]

Conyers admits in a statement that he settled with the accuser "with an express denial of liability – in order to save all involved from the rigors of protracted litigation." pic.twitter.com/e6EXum8pLY[7]

See? He did them a favor.
This Fucking Guy

He told the AP the opposite *today*
Conyers is the ranking member on Judiciary. Based on convos w ppl generally frustrated w dem leadership, this will be a moment to watch. https://t.co/6MPsoH1L15[10]

So he lied when he denied any harassment claim.

It must be neat to have a taxpayer-funded account that pays off harassment accusers and a secretive process that protects you from public scrutiny. https://t.co/3vYerd2r6t[19]

Wow, this reeks of old school attempts to sweep this under the rug. This rampant abuse of power and taxpayer money is unacceptable and this blatant of an example must not go unpunished #Coyners[22]

Resign @RepJohnConyers[2] ! And pay the Taxpayers back!