Hell must have just frozen over, because I find myself in agreement with Democrat Gov. Terry McAuliffe… Morrissey should resign immediately and exit extreme stage left. The only reason this was a misdemeanor, was that this perv didn’t get to the girl quite fast enough. He’s been seeing her since she was 15 – Morrissey is 57. And it gets better… she’s five or six months pregnant with his baby. This is exactly the type of leadership Virginia DOESN’T need. Figures it’s a Progressive Democrat who has a hankering for young things.[1] 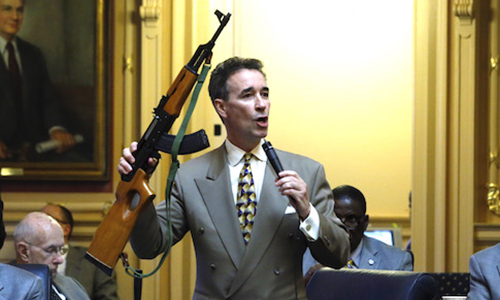 Joseph Morrissey, a Democrat state delegate from Virginia, pleaded guilty to contributing to the delinquency of a minor on Friday on charges stemming from his relationship with a 17-year-old office assistant, according to The Richmond Times-Dispatch[4].

The plea deal makes Morrissey eligible for release in 90 days.

Morrissey was immediately whisked away to jail, but shockingly the delegate hasn’t decided whether he is going to resign from his position in the General Assembly.

According to one member of his legal team, Anthony Troy, Morrissey will be allowed to commute to and from work while returning to jail at night as part of the work-release program.

“We understand that the legislature can run late into the night; but we will know where he is,” Henrico County Sheriff Michael Wade told the Dispatch.

This isn’t Morrissey’s first stint in jail either.

According to the Washington Free Beacon[5], he spent five days in jail in 1991 when he punched a defense attorney in the face during a trial. At the time, Morrissey was the commonwealth’s attorney for Richmond, an elected position that most states refer to as district attorney.

The one-time prosecutor was on the wrong side of the law again in 1993 when he was indicted and had his law license suspended for reducing charges in a rape case in exchange for a $25,000 payment to the victim.

Virginia Democrats and Republicans are less than thrilled with the idea of Morrissey continuing to work in the Assembly while he serves his sentence.

“In light of his conviction on these disturbing charges, the governor believes Delegate Morrissey should resign immediately,” Brian Coy, a spokesman for Democrat Gov. Terry McAuliffe, said in a statement.

Republican Party of Virginia chairman Pat Mullins said Morrissey is “a disgrace not only to himself, but to the Commonwealth of Virginia,” reported the Washington Post[6].

Del. Gregory D. Habeeb, R-Salem, said on his Twitter account: “Joe Morrissey should IMMEDIATELY resign his seat in the House of Delegates and disappear. FOREVER!”

This is the Progressive moron who pulled an unloaded AK-47 from under his desk and flourished it on the floor of the House of Delegates, after a Republican-controlled subcommittee had killed a bill of his that would have tightened gun controls in the commonwealth on weapons. The fact that he would even be allowed to legislate and participate in the Assembly after being convicted and from jail no less, is just absurd. He should be suspended from practicing law period, pending review by the Bar and should definitely be forced to resign. His dalliance with an underage girl is solid cause for removal from office.