In a case that depicts the real war on women, a: Democratic: state lawmaker in Massachusetts was convicted in January of beating a woman when she refused to have sex with him. 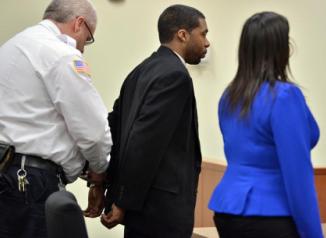 State Representative: Carlos Henriquez: is now serving a six month: sentence after being found guilty of two counts of assault and battery,: the Boston Herald reported[2].

But if you think justice has been served, think again because the disgraced lawmaker continues to serve his constituency from behind bars, according to the Herald:

Inmate lawmaker Rep. Carlos Henriquez is â€¨doing his Beacon Hill business from his Billerica jail cell, thumbing through bills and budget proposals, and speaking to staff by phone “at least once a day,” â€¨according to the disgraced Dorchester Democrat’s legislative aide.

“We’ve been in regular contact with him, and at this point he’s concerned with the issues of the district,” aide Jessica DaSilva told the Herald.

In the face of repeated calls from Gov. Deval Patrick and Democratic Party leaders: for him to step down, Henriques refuses to do so. His attorney has filed an appeal in the case, in part because the black lawmaker was convicted by an all white jury – the victim was Hispanic.

Watch employees react as they learn of Obamacare premium increases[3]

The Boston Globe reported that Democratic House Speaker Robert A. DeLeo said he was unsure how long it might take to oust Henriquez, but the decision would eventually come to a vote of the full House.

For the record, state representatives are paid an annual salary of:  $61,133.