The liberal line on voter fraud is basically that it doesn’t ever occur; so there’s no need for any kind of security to prevent it. This example, among many others, blows that claim out of the water[1]. 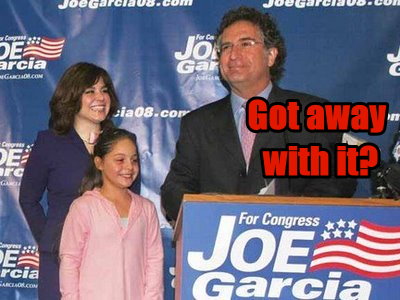 A former chief of staff to Rep. Joe Garcia (D-Fla.) is heading to jail for his role in organizing an online absentee ballot-request scheme in the 2012 elections.

Jeffrey Garcia, 41, who isn’t related to the congressman, will spend about three months in jail as part of a plea deal reached with the Miami-Dade state attorney’s office, the Miami Herald newspaper reported Sunday.

The deal was finalized Monday when Jeffrey Garcia pleaded guilty to requesting absentee ballots on behalf of voters, which is a felony.

“I should not have done it,” Jeffrey Garcia said in court, according to the Herald. “I’m sorry, and I accept responsibility.”

Prosecutors found Jeffrey Garcia had requested hundreds of ballots without voters’ permission, the Herald said. None of them, however, were mailed, forged or cast.

I’m sure Joe Garcia didn’t know a thing about his best friend and CHIEF OF STAFF trying to commit voter fraud. Did you know investigators also “raided the homes of Giancarlo Sopo, the congressman’s communications director, and the family of John Estes, the congressman’s 2012 campaign manager?”[3] Oh yeah, I’m sure Joe Garcia didn’t have the slightest idea any of this was going on.

That’s a pretty sweet deal Jeffrey Garcia got, too. He only got three months in jail for a scheme that could have conceivably swung a tight election if he had gotten away with it. It’s almost as if Katherine Fernandez Rundle, a Janet Reno protege who is the Miami-Dade State Attorney, was giving Garcia a slap on the wrist so as not to discourage voter fraud.

But don’t worry, folks. We don’t need voter ID because no one would ever, ever, ever lie about who they are in order to try to commit voter fraud.