Texas Democratic Representative Al Green is now recommending that black people stop visiting the White House until President Donald Trump apologizes for his comments to the National Football League, calling players who kneel during the National Anthem “sons of bitches.”

Because making any issue about race is the only way for liberals to feel like they hold the high ground. Despite the obvious fact that this has nothing to do with race and everything to do with patriotism, decency and respect. 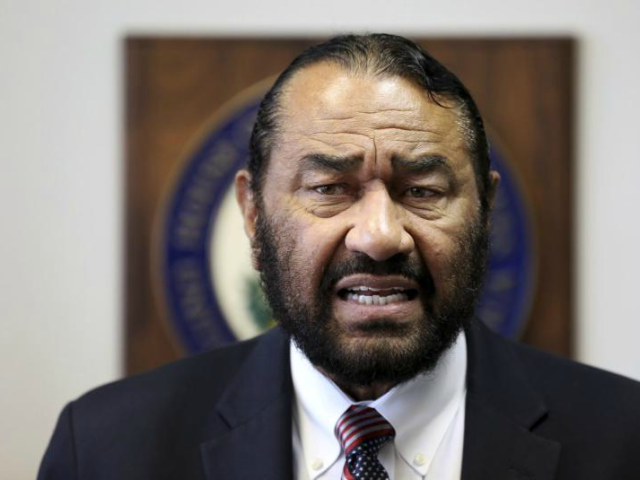 “Every black person in this country ought to be up in arms about what he said about mothers,” he said while doing an interview on the Joe Madison Show on SiriusXM.

“Every black person ought to give some consideration, if you get an invitation, as to whether you will go to the White House until he either retracts that statement or does something else to atone, because this requires atonement,” Green added. “This cannot go unchallenged. He has insulted the mothers of the country. These are the people who bring life to the world. I refuse to allow it to go unchallenged.”

That reach is impressive. He should be a boxer.

Keep in mind that this is not the first time that Green has called for action against President Trump. Recently, he called for impeachment of President Trump regarding the NFL comments[2]. (I don’t remember hearing him calling for Obama’s impeachment after saying “the police acted stupidly,” but I’m SO SURE that he made them and I just missed it.)

This is not a race issue. This is not a First Amendment issue. This is not an issue about anything other than showing respect for a country that has given you a bunch of amazing opportunities. You can protest things and take issue with the treatment of people in the United States, but you don’t have to, nor should you do it during the National Anthem. It’s insulting to try to call millions of Americans who agreed with Donald Trump racist. This isn’t about the color of their skin, it’s about the content of their character. (The blatant lack of it, anyway.)

Not everything is racist, but it’s the only ammunition that people like Al Green have. It’s the only way they can keep pushing their narrative no matter what Trump does or says. It’s impressively pathetic. Or pathetically impressive. Either or.

On a side note, does anyone take this guy seriously?