One of the great ironies of the global warming debate is that the people who are skeptical of the phenomenon are the ones who make the science-based arguments, while the true believers who incessantly rant about “scientific consensus” all too often sound like this[1]. 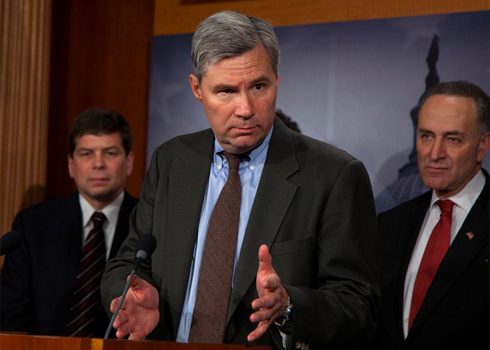 Oklahoma, Rhode Island Democratic Sen. Sheldon Whitehouse took to the Senate floor to rail against his Republican colleagues for denying the theory of anthropogenic global warming.

Whitehouse spent 15 minutes chastising GOP senators and justified his remarks by alluding to states that seek federal assistance in the wake of natural disasters.

“So, you may have a question for me,” Whitehouse said. “Why do you care? Why do you, Sheldon Whitehouse, Democrat of Rhode Island, care if we Republicans run off the climate cliff like a bunch of proverbial lemmings and disgrace ourselves? I’ll tell you why. We’re stuck in this together. We are stuck in this together. When cyclones tear up Oklahoma and hurricanes swamp Alabama and wildfires scorch Texas, you come to us, the rest of the country, for billions of dollars to recover. And the damage that your polluters and deniers are doing doesn’t just hit Oklahoma and Alabama and Texas. It hits Rhode Island with floods and storms. It hits Oregon with acidified seas, it hits Montana with dying forests. So, like it or not, we’re in this together.”

…“You drag America with you to your fate,” he continued. “So, I want this future: I want a Republican Party that has returned to its senses and is strong and a worthy adversary in a strong America that has done right by its people and the world. That’s what I want. I don’t want this future. I don’t want a Republican Party disgraced, that let its extremists run off the cliff, and an America suffering from grave economic and environmental and diplomatic damage because we failed, because we didn’t wake up and do our duty to our people, and because we didn’t lead the world. I do not want that future. But that’s where we’re headed. So I will keep reaching out and calling out, ever hopeful that you will wake up before it is too late.”

What do you even say to that? Do you point out to Whitehouse that trying to blame a tornado on global warming has no foundation in science or do you scratch your head and just wonder how he became such an ignorant jackass?

Well, just in case, “global warming” had exactly zip, zero, nada to do with the tornado that hit Oklahoma and for that matter, any and every other extreme weather phenomenon out there. There’s a simple reason that can be said definitively and that is there has been no global warming since 1998[3].

Whitehouse is ignoring that because he wants to exploit the deaths of people in Oklahoma for his own agenda and that’s despicable. If he had any integrity, he would publicly apologize, but of course, if he had any integrity or better yet, brains, he wouldn’t have said something so dumb in the first place.