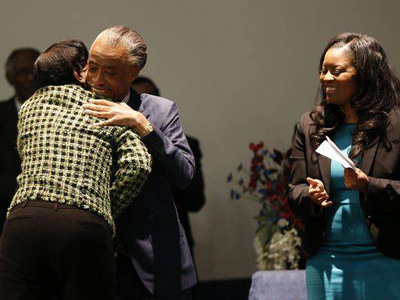 Once again we see an example that to be a Democrat is to celebrate criminality–not merely indulge in criminality, but making it something to be proud of. This time it is evinced in the giant “welcome home” party thrown for a racist who was convicted of voter fraud in Ohio.

You may recall that a Cincinnati, Ohio resident named Melowese Richardson voted six times for Barack Obama in 2012 because he “had a right” to be President. This black racist purposefully voted twice for herself, sent an absentee ballot in for her granddaughter (who went and legally voted on her own on Election Day) and sent three absentee ballots in for her sister who is infirm and in a coma.

This Democrat criminal was such an ignoramus that she fully admitted[1] to her illegal actions right on TV in February of 2013 saying, “I’ll fight it for Mr. Obama and Mr. Obama’s right to sit as president of the United States.”

This racist scumbag was convicted and given a five-year sentence but was just released because activists bleated that her sentence was “unfair” and authorities stupidly bowed to the agitation.

On her release, Ohio Democrats and nationally known left-wingers gathered together for a great party to celebrate this criminal[2]. Even murderer Al Sharpton showed up to join in the celebration.

Once again we see Democrats actually celebrating criminality. It’s bad enough, of course, when politicians and activists perpetrate crimes in pursuit of their political point of view, but there was once a day when Democrats at least pretended that they stood against criminal behavior and were suitably embarrassed when they or their fellows were caught at it.

Oh, but those days are in the past. Now liberals, left-wingers, and Democrats are proud and open about their criminality and encourage others to join them at it.

Here they are gathered together to celebrate the crimes committed by this racist woman. And you can bet that she was just one of tens of thousands of democrats who committed voter fraud that election and every election previous.

It is quite disgusting, really. But that is what it is to be a Democrat.

America we are now at a time when laws are meaningless. You cannot trust the system because there system is capricious. The law means nothing and it is all thanks to the Democrat Party.

(Above Photo: The Enquirer/Jeff Swinger)