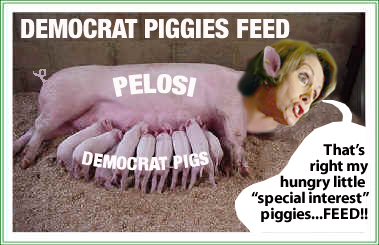 There is nothing more dangerous than a party that is about to lose power but still has temporary control of the reins of government. That is, of course, what we call the lame duck session of congress — more like a zombie congress; dead men walking… or sitting as the case may be. It has gotten so bad that Democrats are even throwing away the rules in order to indulge a bacchanalia of a left-wing agenda, the same sort that got them kicked out of office.

Attempting to indulge every activity that got them kicked out of office in a landslide that the country hasn’t seen in decades, House Democrats have instituted what is being called “martial law.” They are trying their level best to shove every profligate spending plan, every extremist, left-wing, anti-American idea they can fling at the people of the United States all in an effort to beat the clock before most of them have to relinquish their seats to Republicans.

House Democrats passed a rules change that would allow them to skirt the usual process and bring any bill they want quickly to the floor for a vote. This rules change is meant to help them push their extremist agenda as quickly as possible before the new congress is convened next year.

The Republicans have decried the move[1].

So, the voice of the people be damned. Democrats do not care that their agenda cost them the election. They intend to grab as much power, as many goodies, as many payoffs to their pals as they can before they are forced from office.

After all, they haven’t learned from the sound whipping they’ve received. Look at their boss, Speaker of the House Pelosi. Since the massive shellacking she received on Nov. 2, she has made no serious effort to shake up her caucus. She’s made few changes to leadership to reflect the singular fact that the Democrats failed miserably to hold the American people on their side.

Pelosi seems to feel that she has no reason to assume that she and her party have failed. And this inability to grasp reality is exactly why Democrats are so dangerous to our Republic.