Boy, am I glad[1] this is happening! Nebraska State Senator John Murante (R-Gretna) is now demanding that Democrat Party Chairwoman Jane Kleeb disclose the names of any refugees who received voter registration forms when they got welcoming baskets from the Dems. He is pointing out that they may ‘misunderstand’ the forms and think they can vote illegally. Murante would not come right out and accuse Kleeb and the Dems of doing something illegal… but we all know this is voter fraud.

This all started after Kleeb and the Dems put together at least 50 welcoming baskets with food, linen, toiletries etc. AND a voter registration form on top, along with some useless car stickers that say something like ‘Vote Democrat!’: “Inside each basket, there’s also a letter from the Nebraska Democratic Party welcoming the family to Nebraska. It’s signed by me as chair of the party—and then we include a sticker in there for them to put on their car, and also include the voter registration form and just has our contact information in case they want to reach out and have any questions.” When asked why they would put the voter registration form in there, Kleeb said, “It’s just what Democrats do.” 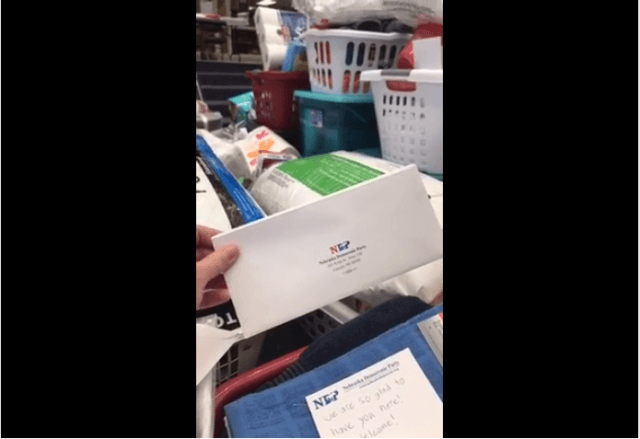 Murante notes in his letter that failure to assist local officials could risk illegal voter registrations, “diluting the voting power of legal voters”. Worse, he notes, some refugees could mistake the offer of voter registration to mean they are indeed eligible to vote, potentially complicating a pathway to naturalization, should they choose to do so. Murante was silent, however, on whether he believes the Democrats did anything illegal.

Both of the refugee resettlement organizations operating in Nebraska – Lutheran Family Services of Nebraska and the Refugee Empowerment Center — are now claiming that anything political was removed before the refugees were given the baskets. Right. Does anyone believe that happy crappy? Not me. Kleeb is reportedly “totally confused why people are up in arms about this.” Are you that dense? Or are you just a liar?

Nebraska, like so many states now, does not require proof of citizenship during voter registration. Big mistake. Doing it that way virtually guarantees that illegal aliens and refugees will vote even though it is against the law. Currently, the only way they catch this in Nebraska is if you decline jury duty or claim immigration status. Fail.

Senator Murante is considered a strong contender for Nebraska’s 2018 election for the office of Secretary of State — a position that would make him the ultimate election administration authority. Let’s hope that happens because Nebraska needs an overhaul on voter registration. Before the 2016 Election, the Public Interest Legal Foundation found that seven counties (Loup, Wheeler, Kimball, Thurston, Hooker, Keya Paha and Thomas) had more than 100 percent voter registration. When comparing total voters against residents aged 18 and older, the counties ranged from 101 to 110 percent. Nebraska, we have a problem and it’s called voter fraud.

Kleeb Letter by BreitbartTexas on Scribd