Despite Obama Wasting $39 Billion on Solar Energy, Only .5% of Our Power Comes From Solar

Despite the fact that Obama has thrown over $39 billion in our tax money at the solar energy industry, America still only gets a tiny .5 percent of its energy from solar. Yet Obama wants to keep throwing billions more of our tax dollars at this non-existent energy source. 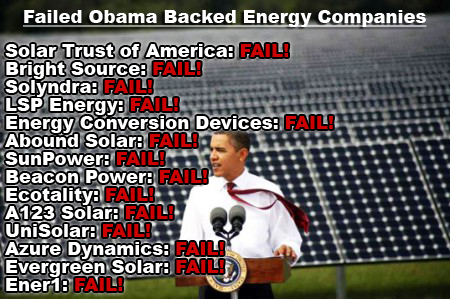 As Obama and his minions spend the week idiotically claiming that giving jobs to ISIS terrorists will solve the Islamic terror that has been going on since well before the 1400s, we find some of the massive waste[1] he has perpetrated right here in the USA.

Despite receiving an estimated $39 billion in annual government subsidies over the past five years, the solar energy industry accounted for just one half of one percent (0.5%) of all the electricity generated in the U.S. during the first 10 months of 2014, according to the U.S. Energy Information Administration (EIA).

Between January and October of last year, the U.S. produced a total of 3,431,473 million kilowatt hours (kWh) of electricity. But only 15,973 million kWh were generated by solar thermal or photovoltaic (PV) solar modules that use semiconducting materials to convert sunlight into electricity, according to EIA’s latest Monthly Energy Review.

The amount of solar power generated last year was up from the 9,252 million kWh produced in 2013, but still remained a tiny fraction of the nation’s total power generated in 2014 despite billions of dollars in subsidies spent on hundreds of solar programs at the federal, state and local level.

Most of this money went straight into the pockets of Obama’s cronies and pals instead of into any actual production of energy.

Also, the Heritage Foundation has an interesting piece revealing how billionaires run solar plant scams[2] to get billions in Obama bucks.