What an abhorrent mistake.[1] It shows a callous disinterest and blatant disregard for this young woman’s death and the circumstances it occurred under. Not only is Jeh Johnson evil, he’s just incompetent. How can you go in front of the House Judiciary Committee on the issue of sanctuary cities and violent criminal illegal immigrants, and not even know the victim’s name? He probably didn’t know the details of her murder either and he probably doesn’t care. It’s not part of his political agenda and everyone knows you have to break a few eggs to make a Marxist omelet. He mispronounced Kate’s name. What an insult to her family and to her memory. But I’ll bet he got the murderer’s name right – oh, yes he did. 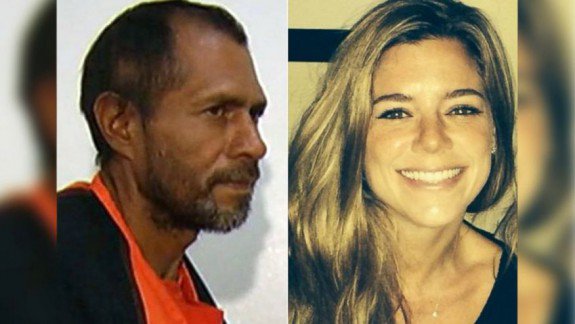 Jeh Johnson, the secretary of the Department of Homeland Security, appeared not to know the identity of the woman murdered in San Francisco earlier this month by an illegal alien who had been deported numerous times.

Johnson was asked in a House Judiciary Committee hearing on Tuesday about the July 1 murder of Kathryn Steinle. The 32-year-old, who went by the name Kate, was shot in broad daylight by Juan Francisco Lopez-Sanchez, a 45-year-old illegal alien with seven felonies and five deportations on his record.

“In terms of the San Francisco case, Kate Steinle,” Johnson began in response to a question from Michigan U.S. Rep. John Conyers, “and I hope I’ve pronounced her name correctly.”

Lopez-Sanchez was been released in April by the San Francisco County sheriff’s department despite having had a detainer request placed on his by U.S. Immigration and Customs Enforcement (ICE), a subagency of DHS.

The sheriff’s department did not honor the request because it is a “sanctuary city.” That means it has laws on the books which prohibit city employees from cooperating with ICE in most circumstances. ICE has blamed the sheriff’s department for releasing Lopez-Sanchez, though House Judiciary Committee chair Bob Goodlatte, a Virginia Republican, said that the federal agency shares some blame as well.

As Townhall noted[3], later during his testimony, Johnson was again asked about Steinle and her family, which has been heavily critical of sanctuary cities since her murder.

“Has the administration reached out to the Steinle family, to your knowledge?” Ohio U.S. Rep. Steve Chabot asked.

“To who?” a perplexed Johnson asked.

“To the family of the woman who brutally murdered by this individual who had committed seven different felonies in four different states and my understanding had been deported, kept coming back, has the administration reached out to that family?” Chabot said.

“I’m sorry, I don’t know the answer to that question sir,” Johnson responded.

Echoing criticism levied by many conservatives frustrated by the lack of attention Steinle’s killing has received, Chabot noted that the Obama administration very often attends funerals or weighs in on other high-profile murders.

At the beginning of his testimony on Tuesday, Johnson said that he has not changed his stance on sanctuary cities and says that local cities and counties should be allowed to choose when to cooperate with ICE when it files detainer requests.

“I do not believe that we should mandate the conduct of state and local law enforcement through federal legislation,” Johnson told told Virginia U.S. Rep. Bob Goodlatte, the chairman of the House Judiciary Committee. “I believe that the most effective way to work with jurisdictions … is through a cooperative effort.”

When asked if Obama and his minions had reached out to Kate’s family, Johnson did not recognize her name. And you know they didn’t reach out and won’t. Johnson doesn’t know? He’s either lying or is just profoundly stupid or both. Imagine that… Obama has time to go to or send his toadies to the funerals of gang bangers, racists and murderers. Coincidentally, they are all of a certain race. Funny huh? But a white girl gunned down by an illegal immigrant felon, who was deported five times, was actively brought back to San Francisco by the sheriff and stole a Fed’s gun out of his car, then picked the happiest, prettiest face he could find to blow away… well, Obama is booked. Too busy to even call. Racist, politically correct asshat. Since when should cities get to ‘choose’ whether to follow the law or not? To cooperate with ICE or not? In other words, only follow the law if Obama approves of it. So, quid pro quo… Obama and Jeh Johnson approved of Kate’s murder.