Did Students Plan Baltimore Riots to Copy the Violent Movie ‘The Purge’?

As Baltimore burns, some are saying that the riots didn’t renew on Monday necessarily because of the death of Freddie Gray alone but that the riots were also spurred by a planned “purge” day spread by social media among high school students. 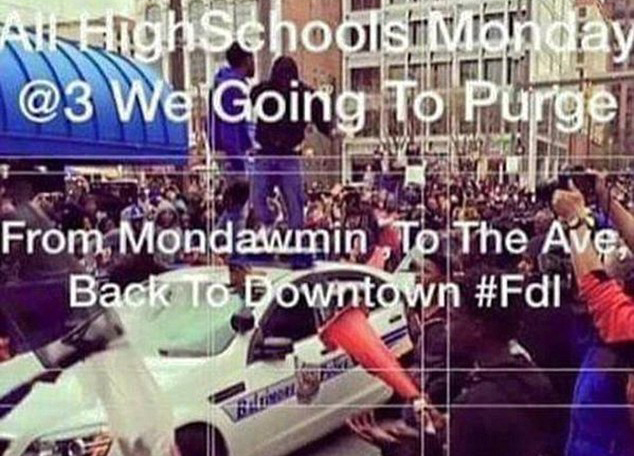 You may have missed the 2013 film titled “The Purge,” a schlock movie starring Ethan Hawke. If you did, the premise was that society had become ideal except for one day a year when all laws were suspended and residents could rape, murder, destroy, and steal to their heart’s content.

Well, apparently some sources are saying that last week a social media call for a Baltimore “Purge” event[1] coincided with the start of the riots.

In the hours before Baltimore erupted into riots on Monday, an online flier swept across social media inciting high school students in the area to “Purge”–a reference to a movie, starring Ethan Hawke, where all crime is made legal.

A state of emergency has been declared in Baltimore, Maryland after the city descended into ‘an absolute war zone’ following the funeral of Freddie Gray.

Police said on Tuesday that 202 people were arrested, 15 buildings set on fire along with 115 vehicles.

Gray, 25, was arrested for possession of a knife on April 12 on Baltimore’s west side. According to his attorney, Gray died a week later in hospital from a spinal cord injury he received in police custody.

As Gray’s grieving family held his funeral on Monday morning, an online flier circulated among school students, reading: ‘@3 We Going To Purge’, beginning at Mondawmin Mall in the northwest of the city and moving downtown.

Well, what do you think. Was this just another log on the fire, an opportunistic attempt to make matters worese?