A popular doctor at the Harvard-affiliated Beth Israel Deaconess Medical Center (BIDMC) in Boston was told to clear out his belongings after he expressed a traditional, religious opinion about gays, reports say. 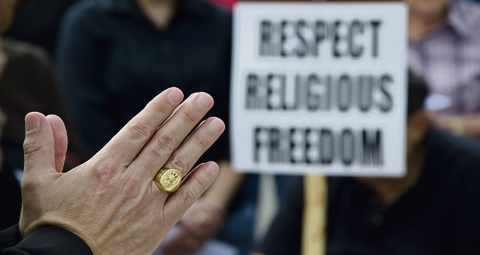 So, now Christians are not allowed to be doctors[1]?

Dr. Paul Church, who had admitting privileges at Beth Israel Deaconess Medical Center (BIDMC) in Boston, was told his position on homosexuality constituted as “discrimination,” “harassment,” and “unprofessional conduct,” and that Bible verses regarding homosexuality are similarly “offensive” and discriminatory.

“Dr. Church was censured and subjected to disciplinary action for stating an objection on medical and religious grounds to the promotion of homosexuality,” says Richard Mast, a Liberty Counsel attorney representing Church.

Mast confirmed Church received a letter from the hospital, assessed the letter and exercised his rights under the bylaws for admission purposes. Though the hospital had handed down the expulsion in March, Church was denied an appeal in early September.

LifeSiteNews reports the hospital began censuring Church’s comments more than a decade ago.

Church’s comments were allegedly posted on a BIDMC communication server years ago.

“Life expectancy is significantly decreased as a result of HIV/AIDS, complications from the other health problems, and suicide. This alone should make it reprehensible to the medical community, who has an obligation to promote and model healthy behaviors and lifestyles.”

What did he say hat wasn’t true?