Donald Trump: How Can Hillary Clinton Run After Her ‘Criminal’ Actions?

I have no doubt that if Trump gets the nomination[1] and the voting is fair, that he will trounce Hillary Clinton. America is just not that into the Hildebeast. While Hillary is preaching entitlements, pandering to radicals and minorities, and pushing her Marxist schtick, Donald Trump has tapped into what has America fuming – illegal immigration, terrorism and Constitutional rights. He’s justifiably critical of others running – most of them (except notably Ted Cruz who is strictly following Reagan’s Eleventh Commandment and is a friend of Donald Trump’s) are attacking The Donald, trying to discredit him so they can rise in the election polls. It’s not working and in fact, Trump has laid out his rules… if you attack him, he will slap back and he’s a master at it. How do you think he became such a wealthy success? He didn’t do it by being a wall flower. Hillary is a criminal and shouldn’t be running and Trump is going to rub her face in it at every available opportunity. 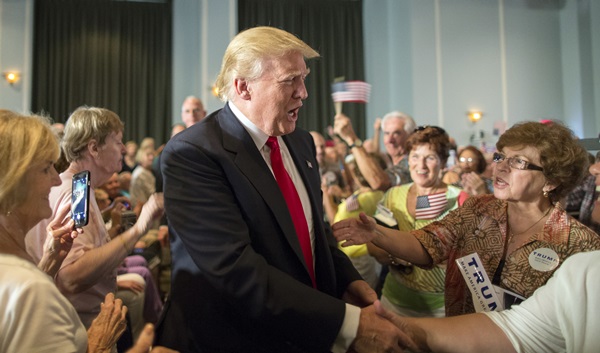 “I think I’ll beat Hillary easily,” Trump said Sunday on CNN’s “State of the Union.” “I don’t think these other guys will.”

Trump is handily leading his fellow Republicans[3] among GOP primary voters, but admits he has work to do to against Clinton. He told host Jake Tapper he will do that step-by-step.

“I’m not thinking too much about Hillary right now,” Trump said, instead turning to criticizing the records of his fellow Republicans, including former Florida Gov. Jeb Bush and Wisconsin Gov. Scott Walker, his nearest rivals.

Trump said he also made “some very strong statements” about Clinton in Iowa on Saturday, condemning her use of a private email server[4] during her tenure as secretary of state.

“What she has done is criminal,” Trump said. “I don’t see how she can run. …What she did is far worse than what Gen. [David] Petraeus did, and he’s gone down in disgrace. … I mean, she got rid of her server. He never did anything like that.”

Clinton is being “protected” by Democrats and by the mainstream media, he said, noting how The New York Times made changes to a recent story that initially reported that Clinton herself had sent classified information over her private email server, then changed it to reflect that someone had, but did not specify the person.

“I respect the Times for going after her like that, but even the fact that they changed the story upon their request, I think they were more right the first time, Trump said.

Trump also hit on other subjects:

• Border wall: “Before that’s done, we’re going to get the bad ones out. We have some really bad dudes right here in this country, and we’re getting them out and sending them back to where they came from. I don’t mean Mexico. I mean they come from all over.”
• Path to citizenship: “We’re going to see what we’re going to see. … It’s a very, very big subject, and a very complicated subject.”
• Louisiana movie shooter: “These are very, very sick people. This has nothing to do with guns. This has to do with the mentality of these people. … You take the guns away from the good people and the bad ones are going to have target practice. … He should be in an institution. He was a very sick puppy.”

Tapper also challenged Trump on his campaign denying press credentials to The Des Moines Register after that newspaper wrote an editorial calling for Trump to drop out of the race.

“I would, just as a fellow reporter, like to make a plea for my brothers and sisters who are journalists if you could not hold them responsible for what the editorial writers write,” Tapper said.

Trump said he agreed, but that the reporters for the paper had written untrue things about him long before the editorial appeared last weekend. Reporters from the paper were allowed into his event, but weren’t allowed press credentials, he said.

“They just have to sit with everybody else,” Trump said.

I don’t feel sorry for the press here in the slightest. Trump didn’t keep them out, they just weren’t given press credentials and they had to sit with everyone else. Poor babies. I don’t see that is out of line to publicly chastise those who have maligned you in print and on media. Is he supposed to just take it with a smile? America is sick of that and they want someone with a spine to lead them. They are starved for leadership. Trump is obliging them. His stances on immigration are not as hardline as I would like, but right now what Trump is selling, America is buying. It is refreshing and if he gets the nod, he’ll have my vote. It would be nice for a change to have a real man in the White House – someone who actually loves America.