Ed Murray Learns That for Now There Are Still Some Limits

It used to be that public figures were held to high moral standards. But at some point during the Clinton Administration, “Everybody Does It” was embraced by many as our national moral creed. Even now, politicians still resign in disgrace. But before they do, things go much further than they ever would have in the past. Presenting Seattle Mayor Ed Murray, case in point:

A younger cousin of Seattle Mayor Ed Murray on Tuesday became the fifth man to publicly accuse the mayor of sexual abuse, saying Murray repeatedly molested him as a teenager in the 1970s.

Murray announced his resignation hours after the new allegation surfaced.

Joseph Dyer, 54, a dialysis technician and Air Force veteran, says he was 13 when Murray forced him into sex for about a year while the two shared a bedroom in Dyer’s mother’s home in the Long Island town of Medford, New York. …

According to Dyer, the molestation stopped only after a boy in a Catholic group home where Murray worked accused Murray of abuse. His uncle, Dyer said, negotiated to get group-home officials not to pursue charges as long as Murray left. After that, Murray left town…

Dyer’s mother — Murray’s first cousin — said her son came to her several months after Murray moved out to say he had been abused.

“It’s a painful thing for a parent to go through because I wanted to protect all my children,” said Maryellen Sottile, 76. “And here this man came into my home, and he did these terrible things to my son.”

Terrible things? This woman is a homophobe!

Murray, 62, a former Democratic state legislator, has repeatedly denied that he sexually abused anyone, contending the accusations are part of a political takedown targeting him for his progressive politics and record as a gay-rights champion.

But he still had to resign, because the evidence is piling up.

Murray’s other accusers — four men with criminal pasts and drug histories — all claim Murray abused them decades ago, when each was a troubled teenager.

Murray is getting a raw deal. A little further down the Left Coast, another noisily gay politician shared Murray’s M.O. of preying on troubled teenaged boys. Harvey Milk is now regarded as a demigod among liberals. The U.S. Navy is even naming a ship after him. The only difference between disgrace and beatification is that Murray failed to get shot by a guy who ate too many Twinkies. 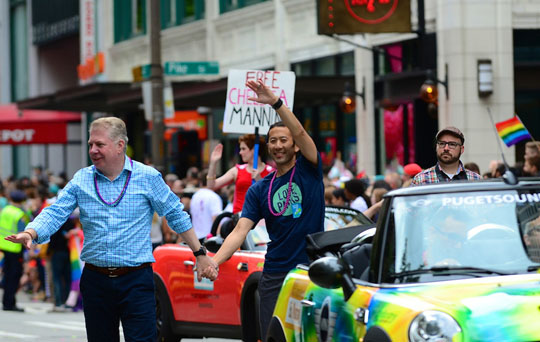 Paragon of liberal morality Ed Murray, appropriately on the left.

On tips from Sean C and Steve T. Cross-posted at Moonbattery.