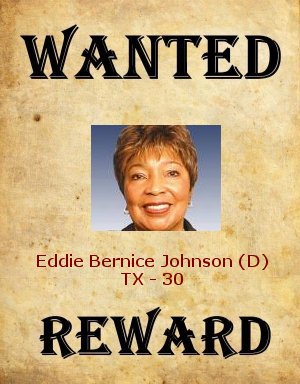 From Waco Texas, Congresswoman Johnson studied nursing at St. Mary’s College at the University of Notre Dame. She returned to Texas, where she became Chief Psychiatric Nurse at the VA Hospital in Dallas. She received a Bachelor’s Degree in Nursing from Texas Christian University in 1967 and a Master’s Degree in Public Administration from Southern Methodist University in 1976.

Johnson was elected to the Texas House of Representatives in 1972 and went on to lead the Labor Committee. She was appointed by President Jimmy Carter to serve as Regional Director of the Department of Health, Education and Welfare in 1977. In 1986, she was elected as a Texas State Senator, serving until she was elected to Congress in 1992.

Johnson has also served in the position of Senior Democratic Deputy Whip. Congresswoman Johnson is credited with originally authoring and co-authoring more than 150 bills that were passed by the House and Senate and signed into law.

Eddie Bernice Johnson, then Chair of the Congressional Black Caucus, contributed an article to the Communist Party’s People’s World, of Dec. 7, 2001, entitled, “Drug czar assures repeat of past failures:” 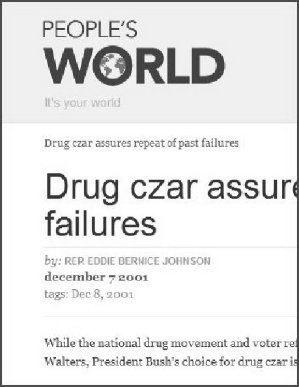 Walters’ nomination for director of the Office of National Drug Control Policy is pending before the Senate after being approved by the Judiciary Committee. I strongly disagree that if confirmed, Walters is the right man for the job. A protégé of former drug director William J. Bennett, Walters is considered a hardliner in the drug fight. His writings depict him as viewing drug addiction as a problem to be solved by courts and prisons rather than a public health issue that can be resolved through hospitals and treatment…

Critics have noted that decades of the law enforcement, lock-’em-up approaches supported by Walters have helped land 500,000 Americans behind bars and consumed tens of billions of tax dollars without reducing the demand whatsoever.

Yet, Walters would continue that failed policy, according to his writings on drug policy. In a recent op-ed piece Walters wrote that research showing that the criminal justice system is imprisoning too many people for drug possession, unjustly punishes Black men and the sentencing is too long and harsh are “the three greatest myths of our time.”

The choice of Walters is an embodiment of policies that have failed. They are mistakes we can’t afford to repeat.

Judy Bryant of the Education Workers Union (Alliance/AFT) and Gene Lantz, a leader of the AFL-CIO affiliated and communist infiltrated Alliance of Retired Americans, honored Congresswoman Johnson for “her work on health care” at the union hall at 334 W. Center, Dallas, TX on August 21, 2008.

Gratitude from the Left

At noon on November 13, 2009, activists from MoveOn, Organizing for America, Jobs with Justice (led by local leader Gene Lantz) and the Progressive Center of Texas, “poured into the offices” of Congresswoman Johnson. They were there to express their gratitude for her vote on the House version of national health care reform.

They were greeted by District Director Rod Givens, who told them that, “it is folks like you who keep the Congresswoman propped up!” The group brought a giant “thank you” card that each of them had signed. They also brought bouquets of yellow roses. Many of them carried pledges to work several hours in her next campaign.

Retirees from all over North Texas “cooperated to celebrate Congresswoman Eddie Bernice Johnson’s lifelong commitment to health care reform” at the Alliance/AFT hall in Dallas on August 21, 2011. The bills for the event were shared by members of the Retired Members Committee of the Communication Workers of America, Alliance/American Federation of Teachers, United Auto Workers Local 848 and Jobs with Justice.

The event was chaired by AFT leader Judy Bryant. Gene Lantz showed the 11 minute introductory video for the Alliance for Retired Americans and conducted a discussion on the importance of organizing for such legislative goals as the Employee Free Choice Act.

Congresswoman Johnson gave a “thorough analysis of the need for health care reform and how to accomplish it through Congress.” 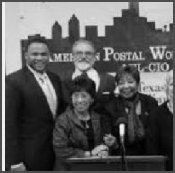 The Texas Alliance of Retired Americans, presided over by Gene Lantz, held a Fiesta Dinner to Honor Congresswoman Eddie Bernice Johnson in Dallas, Texas on May 3, 2013.
Tony Padilla, Secretary of the organization welcomed the guests:

Today is a very special night as we honor Congresswoman Eddie Bernice Johnson, and it is a historical night for seniors.

So, on behalf of the 4 million members of the National Alliance for Retired Americans with the AFL-CIO as our parent organization, it is with great pleasure and honor to pay tribute to you Congresswoman Eddie Bernice Johnson, a longtime friend and supporter of issues affecting Seniors and working families…

Congressman Marc Veasey, we also want to say thank you for the support you give to seniors and the Machinist union on issues before congress, and for your contribution to honoring Congresswoman Eddie Bernice Johnson on this very special historical night.

Eddie Bernice Johnson is a long-time friend of Cuba and a supporter of easing restrictions on the communist dictatorship.

In July 2005, Congresswoman Johnson and her Chief of Staff Murat Gokcigdem spent three days in Havana, Cuba, “to explore firsthand the issues facing the people of Cuba. An opportunity to foster a more pragmatic approach towards dealing with the Cuban government and finding constructive solutions to U.S./Cuba policy concerns.” Johnson’s trip cost $1,555.29 and was paid for by the leftist Christopher Reynolds Foundation.

Pastors for Peace styles itself as “a special ministry of the Interreligious Foundation for Community Organization, and was created in 1988 to pioneer the delivery of humanitarian aid to Latin America and the Caribbean.” In reality, it is a support network for Cuba and Latin American revolutionary movements. The organization sends regular “aid” caravans to Cuba in an attempt to overturn the U.S. trade embargo on the island.

Its long-time head, the late Rev. Lucius Walker, was a lifelong supporter of Communist Party USA fronts and causes.

One of Eddie Bernice Johnson’s first aides was Texas radical Ernest McMillan, who has been very active in Pastors for Peace.

In August 2005, Pastors for Peace was in Dallas, “networking with local churches and peace and justice networks, and doing media outreach.” The group held a vigil in front of Dallas City Hall, along with representatives of the Dallas Peace Center, Pax Christi and the homeless veteran population. Some computers bound for Cuba had recently been seized by U.S. Authorities:

Then we had the honor of receiving a two-hour visit from Rep. Eddie Bernice Johnson (D-TX), former chair of the Congressional Black Caucus. Rep. Johnson has visited Cuba twice, and pledged to increase her advocacy for the release of the computers for Cuba.

I can’t end this note and go back to my personal chores and diversions without thanking the Dallas Peace Center, the Jobs with Justice brothers and sisters, Congresswoman Eddie Bernice Johnson, the Presbyterian “Peacemakers”, the Pan African Connection Bookstore (and any others I may have unintentionally left out) for their contributions – in word and in deed – to the overall efforts.

Rep. Johnson sent a congratulatory message to the Pastors for Peace 20th Cuba Friendship Caravan as it passed through Dallas in August of 2009.