What a lying moonbat[1] Elizabeth Warren is. She gave a speech at EMILY’s List – an abortion advocate group with communist ties. In it she decried President Trump’s first 100 days as being so horrific, that America may never again elect a male President. She’s saying that women are going to shatter the glass ceiling of the Oval Office. This is a woman who denied that she was going to run for the Presidency in 2020… that her book tour was not an event leading up to her candidacy. Anyone with any sense at all can see she’s running by listening to this crazed rant. Lizzy lied… again.

Warren is claiming that there is nothing but ‘bad news’ coming out of the White House. Well, that’s true… if you are a Marxist. Being President should not be based on gender, Lizzy. The left should know that as they are the ones saying that bathrooms shouldn’t be based on it. Which one is it guys? Talk about a misogynist. Warren is not only mentally unstable, her views are that of a communist… just look at her new book, “This Fight Is Our Fight: The Battle to Save America’s Middle Class.” Any questions? 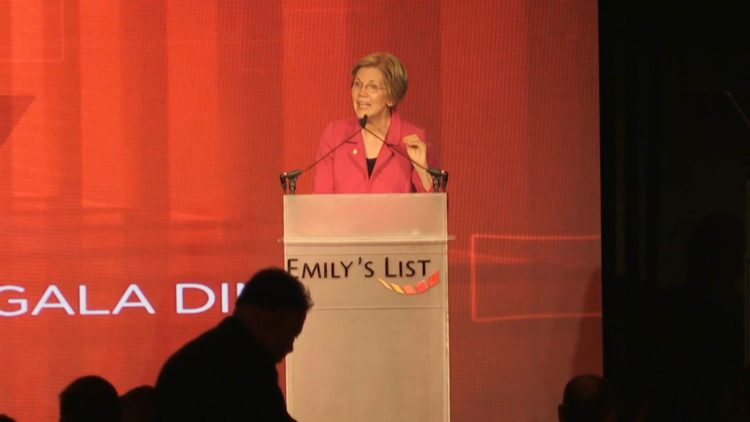 Sen. Elizabeth Warren (D-Mass.) said late Wednesday that she wonders whether President Trump will be the last male president of the U.S.

During her keynote address at a gala for EMILY’s List, a PAC that aims to elect Democratic women who support abortion rights, Warren said there is nothing but “bad news” coming out of the White House.

“The news out of the White House just keeps on coming: Bad news, bad news, bad news,” she said. “The way that things are going, if the next three years and 261 days are like Donald Trump’s first 100 days, I wonder if America will ever be ready for male president again.”

“We’re going to shatter the glass ceiling into so many pieces that the Donald Trumps and Mitch McConnells of the world will never be able to put it back together again,” she added, according to NBC News.

Warren has stoked speculation of a possible 2020 presidential bid, launching a cross-country tour last month to promote her new book, “This Fight Is Our Fight: The Battle to Save America’s Middle Class.”

And here comes that ‘resistance’ crap again… during her address, Warren criticized Trump for failing on promises he made during his presidential campaign and vowing that an “army” of resistance would fight him. “I’ve got news for Donald Trump: Up against our army, he doesn’t stand a chance.” Don’t make me laugh. Please run Lizzy… just do it. Trump will wipe the floor with you.

This woman is a never-ending stream of stupidity. If you get a chance, go back and watch her speeches at Democratic functions. You’ll see just how unhinged this woman really is. Wealthy, dishonest and corrupt… she doesn’t give a rat’s ass about those she pretends to represent. She’s Hillary 2.0 and just as unlikable. If this is the best the Democrats have to offer in 2020, the Republicans will definitely get four more years. Insanity is not a perk when running for the Presidency.