EPA ‘Crucifixion’ Video Pulled From Youtube, The Liberal Cockroach Behind the Move 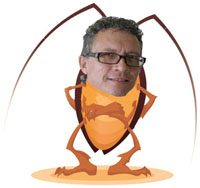 Earlier in the week a video surfaced on Youtube of Al Armendariz, head of the EPA office in Dallas, saying that he and his agency planned to “crucify” any business that crosses them. The video caused a lot of consternation on Capitol Hill as well as recriminations for the EPA. But by Friday the video had been pulled by Youtube because of complaints from the man that originally made the video. Turns out he’s an extreme environut connected with the gay community.

To quickly recap the video, Armendariz noted that his job as an EPA enforcer was like that of the ancient Romans. He joked that the EPA’s philosophy was like the Roman’s who, when mollifying a populace, would “find the first five guys they saw and they’d crucify them.” This, he laughed, would make the town “easy to manage for the next few years.”

So apparently Armendariz felt that the EPA’s job was that of indiscriminate intimidation as opposed to law enforcement.

That said, how does one guy get a video like this pulled and why did it happen?

First of all, we cannot really blame Youtube. They rush to pull any video that is the subject of a copyright question. You have to admit that Youtube would be setting itself up for major legal trouble if it dallied over such incidents. And that is what was invoked here. Essentially the original poster of the video said use of it by others was copyright infringement.

The man that originally posted the video[1] is a fellow by the name of David McFatridge. Research shows he is an activist for the radical environut group the Sierra Club, has been active in the fight against energy independence and the process of hydraulic fracturing, or fracking, as well as a member of the “LGBT” community — or what ever set of letters they are going by this week.

He claimed that use of the small segment of his original recording that had been used by all the TV and radio shows as well as those users that clipped out that segment and put it on their own Youtube account violated his ownership of the video.

Of course, his complaint is absurd. Fair use states that the less than 2-minute segment that others used to show the newsworthy address of a public official does not violate his ownership of the whole recording. McFatridge’s claim is absurd, really. But these laws can be a bit hard to judge, so Youtube rushed to pull the piece from other Youtube accounts to be on the safe side.

So why did McFatridge have Youtube pull the piece and why did he eliminate his own copy of it? Why did this liberal try to send the recording down the memory hole?

I’ll tell you why McFatridge pulled it. There is little doubt that he loved the clip originally. After all, as an extreme envronazi how could he not love it? It showed a government official treating businesses as the enemy, a sector of the economy that should be summarily “crucified” and executed without either trial or cause. That is why he posted it in the first place. It sated his hate. McFatridge is a fan of destroying American businesses and was happy the government’s iron boot heel was about to come down on them.

But as the days rolled on and it began to look like sane Americans didn’t share his hatred, once it became clear that the video was causing trouble for his heroes in the EPA, he panicked.

McFatridge realized that the negative reaction from so many quarters was actually hurting his desire to have the private sector “crucified” by a power mad, Roman-styled government. And so he hastened to have the video deep sixed.

It’s really pretty simple. Like most leftists he hates it when people come to fully understand his real goals and he understands that few Americans agree with him. He knows that the wild-eyed, nuts in the environmental movement are as insane as he but that most people, once they become fully aware of how crazy these nuts are, shy from their methods and his end goals are harmed. So when his real goals get some light shined upon them, he wants to go back into hiding and he scurries away like a cockroach.

That’s what we are seeing here; a cockroach scurrying back into the woodwork so that he can continue his stealth campaign through a government in thrall to his sort of lunatic fringe. McFatridge feared that if too many Americans came to understand that the Obama administration was his kind of extremist they might take action to excise these anti-American nuts from government and remove from power the statist radicals that he so loves.