During the age of Obama, Americans have renounced their citizenship at record numbers. In fact in four out of Obama’s five years in the White House, expatriation numbers set record highs.

Just as an example, during all eight years of George W. Bush’s terms in office, 3,865 Americans renounced their citizenship and moved overseas. But during Obama’s first five years fully 7,988 Americans quit being Americans and in 2013 expatriation soared to 2,999, a record that smashed the previous high of 1,781 set in Obama’s third year in office. 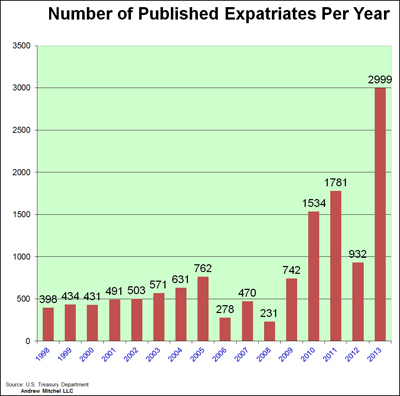 Much of this is due to the outrageous tax situation that the US forces on Americans that live abroad. Ridiculously, the US is the only nation in the world that forces citizens that live permanently abroad to pay taxes on their income to the US even if derived from overseas sources.

This situation has gotten worse recently with the IRS attempting to force forcing countries to report US citizens living abroad to US authorities.