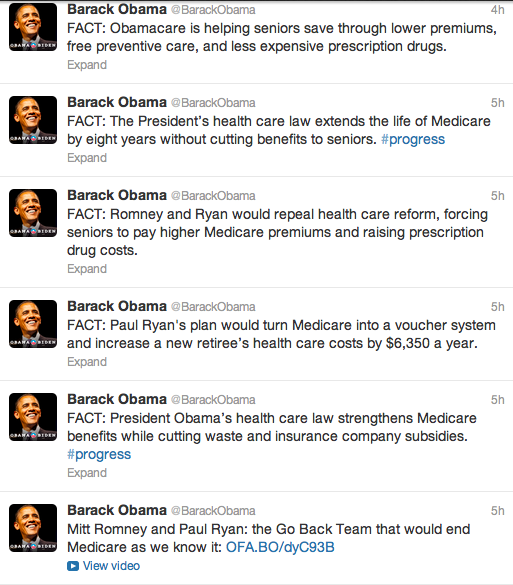 Team Obama has resorted to using old budgetary analysis to slam Ryan as the destroyer of Medicare and a scourge on the American middle class. Factcheck.org analyzed[2] what Obama’s Deputy Campaign Manager,: Stephanie Cutter, said on Face The Nation on August 12. : In that broadcast, she: said on: “It says something about Mitt Romney that he’s picking someone who has a budget plan under which Mitt Romney would pay less than 1 percent in taxes, but the middle class would pay more than $2,000 more in taxes.” Cutter later added: “That’s the budget that Paul Ryan has on the table.” : However, David Alxelrod, Obama’s senior adviser,went on CNN’s State of the Union to say : “Congressman Ryan had a proposal in 2010, if you took Governor Romney’s tax returns and applied the changes that Congressman Ryan wanted to make to the tax system, Governor Romney would pay less than 1 percent on his taxes. We know he paid 13.9 percent.”

Axelrod [also] said, that: Ryan’s 2010 plan[3]: would have meant a less than 1 percent tax rate for Romney, as: several[4]news[5]organizations[6]: have calculated. That’s because the 2010 Ryan budget called for eliminating taxes on capital gains, dividends and interest, and that’s where the bulk of Romney’s 2010, and 2011, income came from. Romney, in fact, said in a: primary debate in January[7]that he would have paid “no taxes in the last two years if capital gains taxes were zero, a proposal being pushed by Newt Gingrich.: Romney’s tax plan[8]: would [m]aintain current tax rates on interest, dividends, and capital gains, with one exception. He would eliminate those taxes for those who earn less than $200,000.

But Ryan has since released budgets that don’t call for the elimination of capital gains. On “Face the Nation,” Cutter clearly gave the impression that Ryan’s current proposal did, saying: That’s the budget that Paul Ryan has on the table and that’s the budget that [the Romney campaign] just wrapped your arms around. That’s simply not true.

Ryan’s 2010 budget plan was proposed when Republicans were in the minority in the House, and it had no chance of passage. His later budget plans were proposed when Republicans were in the majority. Ryan’s: 2011[9]: and: 2012[10]: plans, which were passed on party-line votes in the House of Representatives, called for broadening the tax base, reducing the corporate tax rate from 35 percent to 25 percent, (as specified in the plan released in 2012) creating just two (instead of six) tax brackets of 10 percent and 25 percent, and repealing the alternative minimum tax. But there’s nothing specific on what would happen to capital gains taxes. He does make clear, however, that he opposes raising capital gains taxes, and may favor reducing them. Ryan’s: latest budget[11]: says: Tax reform should promote savings and investment because more savings and more investment mean a larger stock of capital available for job creation.

Concerning the MediScare tactics the left is employing with the $6,000 increase for seniors, “it pertains to Ryan’s old plan that he released last year, which was less generous in terms of how the premium-support payments would increase over time. In a nutshell, Ryan’s plan would keep traditional Medicare as it is for those who are now receiving Medicare benefits. But for new beneficiaries, beginning in 2023, they’d choose a health plan from a new Medicare exchange, which would offer both traditional Medicare and private plans. And they’d get a government subsidy to cover, or partially cover, the cost of the policy.”

it’s true that an: analysis: [12]from the nonpartisan Congressional Budget Office indicated that under the plan Ryan released last year, seniors on the private plans would pay more than they would under traditional Medicare — about $6,000. But that plan had the premium-support payments, or subsidies, growing with the rate of inflation, and health care costs have risen much faster than that for years. Under the new Ryan plan, that premium-support payment would be tied to the second-cheapest health care plan, which can’t grow more than gross domestic product plus 0.5 percentage points. So, Ryan’s plan says the premium support would always be enough to cover the two cheapest plans. However, if the costs do grow faster than GDP plus 0.5 percentage points, the plan says Congress would have to step in and take some unspecified action to keep costs down.

Lastly, it’s funny how Democrats seem to be silent on the $700 billion in Medicare cuts Obama initiated to pay for his new entitlement program.