Father Refuses to Bail Out Son Who Organized a Riot

17-year-old Tony LaShon Cleveland Jr. thought he was being cool by helping to start a riot in Greensboro, N.C. But when he got caught his father refused to bail him out of jail! 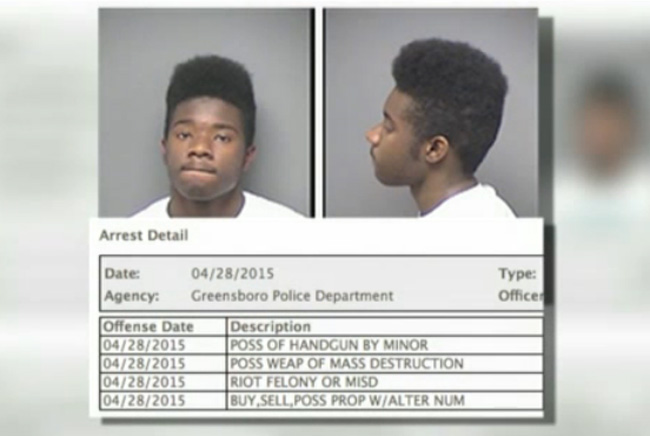 Not only does young Mr. Cleveland face charges for the riot he also faces additional charges for having weapons, including a sawed-off shotgun.

“I am against the riots in Baltimore. I don’t condone what my son did,” Tony Cleveland Sr. told FOX8 off camera. “I don’t agree with using oppression and racism as a platform to do the wrong thing.”

“My son is my responsibility and I’ll always support him,” he added. “I’ve bailed him out of jail before, but I won’t this time because I love him. And he needs to take his medicine.”

He believes his son finally realized the seriousness of the charges against him at his first appearance via video in a Greensboro courtroom Tuesday.

Cleveland Jr. threw his head back and looked shocked when Judge Foster increased his secured bond from$20,000 to $50,000. She told Cleveland if he managed to post a bond even without his dad’s help, he was ordered not to go on the Internet.

We need more fathers willing to teach their children such harsh lessons, don’t you think?