You’ll never meet a nicer person than Clare Lopez[1] and she is stunningly brilliant. She’s also honest to a fault and extremely ethical. I agree with her, Obama has actively allowed the infiltration of our government by the Muslim Brotherhood. He has had America switch sides in the War on Terror. We are now in bed with our enemies and we are standing against Israel. Obama is seeking the destruction of the Jewish State and America. We are no longer stemming the spread of Shariah law… we are assisting in the proliferation of it. Everything he has done since he has been in office is to spread Islamic doctrine and influence, while populating the US with Islamic refugees and helping Iran become THE strong horse in the Middle East. 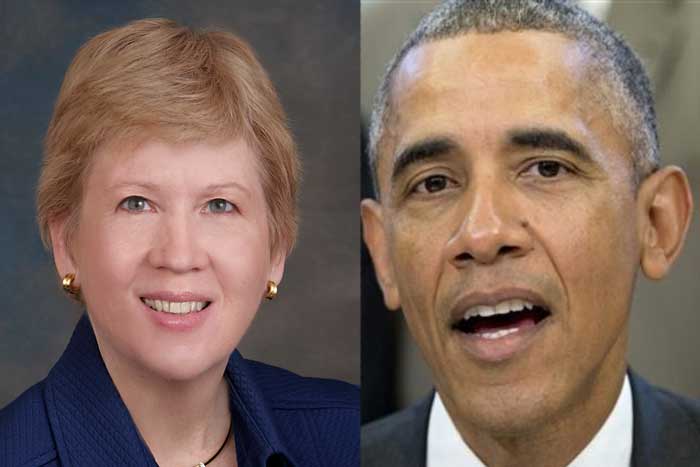 Clare Lopez is a former CIA officer, and she is risking her professional career to call out President Barack Obama in the biggest way possible.

Lopez is well respected in the intelligence community and worked in the Reagan White House. After two decades in the field with the CIA, and as an instructor for special forces and intelligence students, Lopez is now with the Center for Security Policy managing the counter-jihad and Shariah programs.

Now, she is claiming Obama is why America has completely “switched sides” during the war on terrorism. America is now supporting the enemy, especially through the Muslim Brotherhood.

Lopez has been unwilling to speak in public, but has confided with a few members of the House of Representatives her serious concerns about Obama’s motivations about foreign policy decisions.

Lopez noted that the war on terrorism has always been about stopping the spread of Shariah Islamic law, until Obama started to make major changes which clearly supported the Muslim Brotherhood’s jihadist interests.

She said the global war on terror had been an effort to “stay free of Shariah,” or repressive Islamic law, until the Obama administration began siding with such jihadist groups as the Muslim Brotherhood and its affiliates.

The transition was easy for Obama, who already hates American values and principles as an ideologically radical…

Lopez explained, when the so-called Arab Spring appeared in late 2010, “It was time to bring down the secular Muslim rulers who did not enforce Islamic law. And America helped.”

And why would Obama want to do that?

As she told WND earlier this month, Lopez believed the Muslim Brotherhood has thoroughly infiltrated the Obama administration and other branches of the federal government.

She also came to the conclusion Obama had essentially the same goals in the Mideast as the late Osama bin Laden: “to remove American power and influence, including military forces, from Islamic lands.”

The former CIA operative said, “as Israel fought enemies on all sides to remain free, secure and Jewish, America began to move away from Israel and toward its Muslim enemies. And, as Iran moved inexorably toward a deliverable nuclear weapons capability, America helped.”

In addition, Lopez claims that the only reason Obama approved of the killing of Osama bin Laden is he simply couldn’t ignore the chance without looking suspicious. The opportunity presented himself, and he “couldn’t delay it any longer.”

I concur with Clare on Osama bin Laden having to be taken down because otherwise it would have been impossible to deny Obama’s Islamic sympathies. However, I also think that bin Laden had outlived his usefulness and there is a possibility he could have been a willing martyr as he was dying from a kidney condition. Just a thought. This is all orchestrated and planned. What you are seeing is an agenda that is being faithfully implemented and followed. Just as the Iran deal is just a pretext. The whole point here was not the deal, it was redistributing $150 billion back to Iran and to make sure they become a nuclear power. Obama has almost accomplished everything he set out to do with help from both sides of the political aisle. History will look back on this presidency as the greatest betrayal of America ever to occur. That’s if we have a history to look back upon when this is done.