Remember Dennis Kucinich? No? Well, that’s okay — he’s ready to get your attention again. In case you’ve forgotten, Kucinich was a Democratic presidential candidate twice, in 2004 and 2008, but lost to John Kerry and Barack Obama, respectively. He’s mostly faded into obscurity now, but he’s apparently eager to get back into the spotlight, judging by a creepy admission he just made[1]. 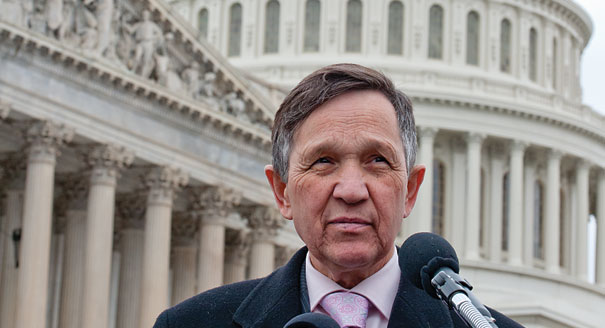 Kucinich appeared on “Hannity” and claimed that there is something deeper to the internal leaks coming out of the Trump administration than just loudmouthed staffers. No, Kucinich claims that it’s a conspiracy, with people looking to actually subvert the President. He claimed that the actions of a “deep state” have the administration “under attack from within.” And there are agencies out to undermine him, too.

“Well, you have a politicization of the agencies. That is resulting in leaks from anonymous, unknown people and the intention is to take down a president,” he argued. “This is very dangerous to America. It is a threat to our republic. It constitutes a clear and present danger to our way of life.”

Kucinich also argued that people shouldn’t worry so much about whether the information being leaked is true or not. “We have to be asking: What is the motive of these people? Who’s putting these leaks out? Why isn’t somebody coming forward to make that charge and put their name and their reputation behind it instead of attacking through the media and not substantiating their position?” Kucinich asked.

He also said that people need to learn to put party politics aside, because “our first allegiance is to our country” and warned that the “deep state” has no party allegiances. “This isn’t about one president, this is about the political process of the United States of America being under attack by intelligence agencies and individuals in those agencies, yes, as you said there might be good people in there, but there are certain individuals who are lifers who want to be able to direct the policy of the country,” he said.

“And if the president stands in their way whether it’s a Democrat or Republican, they’ll just try to run that person out. We’ve got to protect our nation here. People have to be aware of what’s going on. We’ve got to stand up for America. This isn’t about Democrat, Republican. This is about getting what’s going on in the moment and understanding that our country itself is under attack from within.”

Do you agree with Dennis Kucinich?