At a recent press conference, retired Marine Corps General James Conway blasted President Obama’s muddled “strategy” for attacking the ISIS terror army in Syria and Iraq and said that there isn’t a “Snowball’s Chance In Hell” it will work. 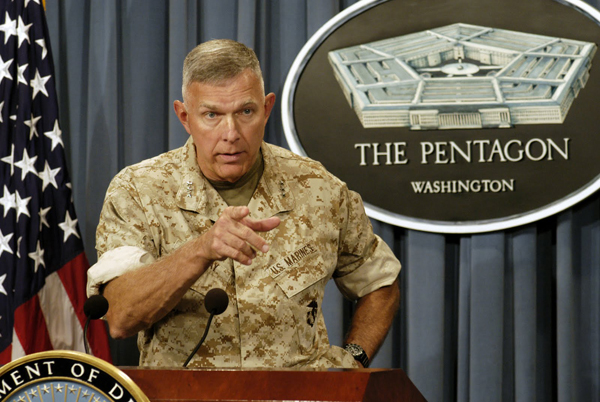 The general’s main concern is that we have no reliable allies in the area[1] to put the boots on the ground necessary to really be effective in fighting ISIS.

The man who was the top Marine general from 2006 until his retirement in 2010 says President Barack Obama’s strategy to defeat the terrorist group the Islamic State in Iraq and Syria is doomed to fail.

“I don’t think the president’s plan has a snowball’s chance in hell of succeeding,” retired Marine General James Conway, who served as the 34th Commandant of the Marine Corps during the end of the Bush administration and the beginning of the Obama administration, said at the Maverick PAC Conference in Washington, D.C. Friday, according to a source in attendance.

The source said Conway’s major concern was that the U.S. did not have a force on the ground in Syria it could rely on, like the Kurdish Peshmerga in Iraq. Though the Obama administration believes it can support what it says are moderate rebel forces in Syria to aid in the fight against ISIS, many critics warn that there may be no truly moderate force in the country of any significant strength

But, really now, does anyone think that Obama is interested in fighting an Islamist terror outfit? He’s spent his entire presidency assisting groups like this. From the Muslim brotherhood to the Palestinians, Obama has given them all his attention.

In fact, last year when Obama was drawing his failed “red line” in Syria, he was trying to get Congress to arm ISIS itself! Now, a year later, Obama is doing an about face and claiming they are the threat?

No wonder our generals have no faith in this feckless president. He doesn’t even know who the enemy is!