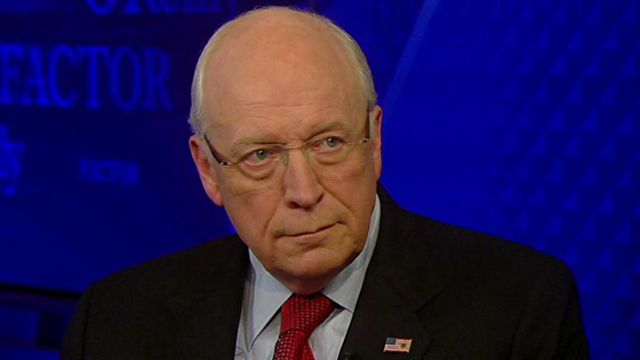 Usually Republicans try to act as if they don’t really think Obama’s plan is to destroy the USA, so Cheney should get major kudos for coming right out and saying it. Cheney made his statement in an interview with radio talker Hugh Hewitt.

HUGH HEWITT: Let me play for both of you a cut from earlier today. The president sat down with an NPR reporter who asked him about Scott Walker’s statement on this show last week that he’s repudiate the emerging Iran hologram–I don’t call it a deal–on day one. Here’s what the president said.

PRESIDENT OBAMA: Any president who gets elected will be knowledgeable enough on foreign policy and knowledgeable enough about the traditions and precedents of presidential power that they won’t start calling into question the capacity of the executive branch of the United States to enter into agreements with other countries. If that starts being questioned, that’s going to be a problem for our friends and that’s going to embolden our enemies and it would be a foolish approach to take. Perhaps Mr. Walker, after he’s taken some time to bone up on foreign policy, will feel the same way.

HEWITT: Vice President Cheney, you’ve been boning up on foreign policy since you entered the House 30 years ago. What do you make of that statement.

DICK CHENEY: Well it starts from a flawed presumption on Obama’s part. For most of the last 70 years since World War II, we’ve had a bipartisan record in this country between Democrat and Republican. Harry Truman, Jack Kennedy, Lyndon Johnson, Ronald Reagan, Dwight Eisenhower, the Bush’s believed America had to play a leading role in the world and needs to maintain first class military capability to do that and occasionally use it. That the world works best with U.S. leadership. The first president, really, who doesn’t–no longer believe that fundamental truth is Barack Obama. What he’s saying, his criticism of Governor Walker–I think probably Governor Walker welcomes it. It’s almost like a paid commercial. I heard today as soon as the statement came out from Obama criticizing the governor, he immediately sent out to all of his supporters. I’m glad he did that. It’s a mark of weakness of this president that he’d say such a thing.

HEWITT: Is he naive, Mr. Vice President? Or does he have a far reaching vision that only he entertains of a realigned Middle East. That somehow it all works out in the end.

CHENEY: I don’t know Hugh. I vacillate between the various theories I’ve heard. If you had somebody who, as president, who wanted to take America down. Who wanted to fundamentally weaken our position in the world, reduce our capacity to influence events. Turn our back on our allies and encourage our enemies, it would look exactly like what Barack Obama is doing. I think his actions are constituted in my mind are those of the worst president we’ve ever had.

Come on. Who can seriously doubt that Obama’s main goal is to harm this country? His EVERY action proves it.