This is a many faceted story, but it appears that Bill and Hillary Clinton worked to help the Russians take control of a Canadian uranium mining company putting both the US and Canada in danger of losing control of nuclear assets. 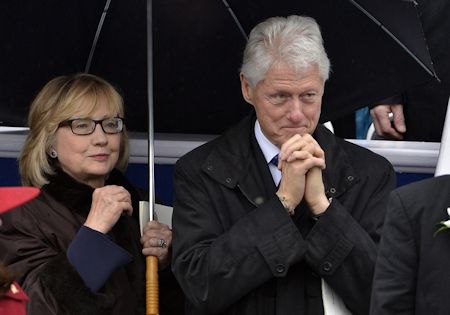 The New York Times reports that early in 2013 the Russians were ecstatic on taking over a Canadian uranium company. But the paper also reveals[1] the little known link between the Russians and the Clintons.

But the untold story behind that story is one that involves not just the Russian president, but also a former American president and a woman who would like to be the next one.

At the heart of the tale are several men, leaders of the Canadian mining industry, who have been major donors to the charitable endeavors of former President Bill Clinton and his family. Members of that group built, financed and eventually sold off to the Russians a company that would become known as Uranium One.

Beyond mines in Kazakhstan that are among the most lucrative in the world, the sale gave the Russians control of one-fifth of all uranium production capacity in the United States. Since uranium is considered a strategic asset, with implications for national security, the deal had to be approved by a committee composed of representatives from a number of United States government agencies. Among the agencies that eventually signed off was the State Department, then headed by Mr. Clinton’s wife, Hillary Rodham Clinton.

So, Hillary gets millions in donations and then turns around and helps the Russians gain a strong position in the world’s uranium stocks?

That is an amazing accusation!