The Hildebeast must be grateful that Giuliani[1] is no longer a U.S. attorney, or she’d have someone who is serious getting ready to nail her. It’s a pity that no one out there is either aggressively pursuing Clinton’s crimes or seems to be getting anywhere on doing so. She should be in an orange pantsuit and behind bars. Not only is the Clinton Foundation as corrupt as they come, she has left behind a whole list of criminal activity in her wake. From Benghazi to the blatant destruction of evidence and emails, the woman is guilty of numerous felonies and high crimes. Of course, the DOJ will never hold her accountable… they are corrupt as well and cover for any misdeeds this Administration commits. And they do it professionally and legally, hiding behind the law after twisting it to bend to their needs. The real disgrace is that other than Rudy Giuliani, there are very few even questioning Hillary Clinton’s actions and whether she should be prosecuted for them. 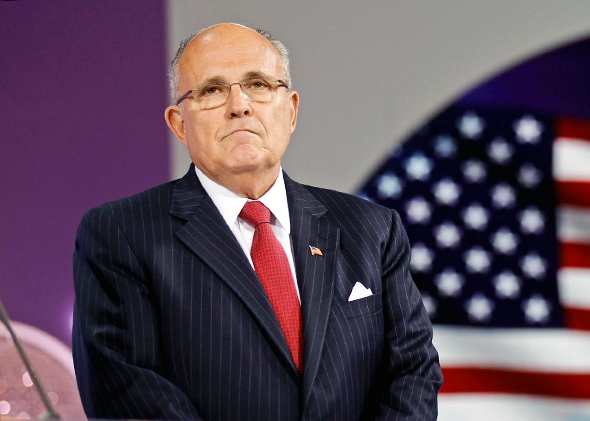 If former Republican New York Mayor Rudy Giuliani were still a U.S. attorney, Hillary Clinton would be facing far more legal trouble for her use of a private email server as secretary of state.

“I’d have her under investigation for about five different crimes,” Giuliani said during an appearance on CNN’s “New Day” program. “I think it’s outrageous that the Justice Department is not moving forward with this.

Giuliani argued that Clinton’s time as secretary of state raised some serious questions about the Clinton Foundation’s relationship with a number of international companies.

“I think it’s clear that she had a conflict of interest, her husband getting hundreds of millions of dollars, she’s making decisions about companies and about corporations that he’s getting money from. I think they filed a joint tax return,” he said.

But the real criminal act, Giuliani said, was Clinton’s use of a private email server and her subsequent refusal to preserve records from her time at the State Department.

“I believe she should be under investigation by the United States attorney in the Southern District of New York for obstruction of justice, for destroying government property,” he said.

He cited the case of former Army Gen. and CIA Director David Petraeus, who was forced to resign his office, fined $100,000 and placed on probation for two years for mishandling classified information by sharing it with the woman who was his mistress as well as his biographer.

What Clinton did was worse, Giuliani said. She not only “mishandled” government information, but intentionally destroyed records and emails, he said.

“Hillary Clinton, there are five acts we are talking about. Petraeus gave away one or two little things. She destroyed a drive with 34,000 emails on it,” he said. “In a trial court, I could argue to a jury that is an inference of guilt.”

Unlike Giuliani, however, the Justice Department apparently doesn’t think deleting 34,000 emails with potentially classified information is a criminal act.

At least, not when a Clinton does it.

The DOJ is quick to nail any Republican, conservative or military person they can on the flimsiest of charges. But if you are Obama, Clinton or one of their cronies, you walk Scott-free. Obama and Hillary brought the Chicago mafia right into the Oval Office and Hillary feels she is exempt from any scrutiny or prosecution because she has friends in high places. So far, it’s working for her. Our legal and judicial system is failing us. Our government now is controlled by emboldened criminals who do as they please. They rig the courts and tell those that are supposed to follow the law that they need only follow the laws they tell them to. Obama has done his best to nullify the Constitution. Hillary allows people to be coldly slaughtered and lies about her dealings left and right with no compunction at all. She brazenly destroys 34,000 emails and then says that they were personal. All of it’s personal to Hillary, because it’s all about her and not the law.