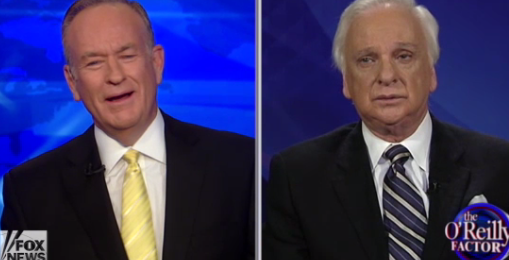 On The August 13 broadcast of the O’Reilly Factor, Bill had regular guest Bernie Goldberg discuss Andrea Mitchell’s absurd comment that Paul Ryan isn’t a pick for “suburban moms.” : This came after Ryan claimed that rights come from God, not government, but Mitchell seemed to think these two unrelated points, when combined, made a cogent argument.:  Apparently Ms. Mitchell hasn’t heard of an obscure statesman in American history known as Thomas Jefferson.

Mitchell’s complaint exposes the disconnect liberal elites have with normal Americans as Goldberg articulated on the show:

BERNARD GOLDBERG: Yeah. This is — I say this is almost funny. Paul Ryan says that our — first, let me say I think what she is really saying is this is not a pick for liberal women who I, Andrea Mitchell, hang out with. I think that’s the real point she is making. But Paul Ryan says that our rights come from God, not from government. However, you feel about that, whether you think they come from God or from government, however you feel about that how does she jump to the conclusion that this isn’t a pick for women? The younger women, single women will vote for Barack Obama. We know that. Married women, married women with children, older women tend to vote Republican. But something has happened to Andrea Mitchell along the way. I think the MSNBC culture has washed over her.: She travels all over the world with Hillary Clinton. I think she ought to spend more time in that part of the country between Manhattan and Malibu and meet some women who aren’t like the ones she hangs out with in Georgetown.

BILL: O’ REILLY: Look. I mean— I agree with you. Ms. Mitchell used to be a very hard news oriented journalist and is no longer that and she says she’s things off the top—I mean here is how ridiculous this is. Paul Ryan says our freedom comes from God. Doesn’t the collect Declaration of Independence say that? I believe it does. Inalienable rights. Are you quibbling with that Andrea? Are we going to set the Declaration on fire now? Or What are we going to do?

GOLDBERG: My point is even if she is quibbling with that even if you believe our rights don’t come from God, that there is no God, that they come from government—how do you go from that to that this isn’t a vote for women? I don’t get the connection. And I will tell what you it is though. When reporters hang — they live in a bubble. And her bubble is in Georgetown. And when you hang out with too many like-minded people, you make the mistake of thinking everybody thinks that way. And they don’t.

O’Reilly probably should have quit while he was ahead however, as he laughably claimed that:  “Ms. Mitchell used to be a very hard news oriented journalist” and for expressing his desire to get:  “Ted Koppel out of semi-retirement and have him do” the vice presidential debate.”