It’s getting ever more violent[1] out there for Republicans. Many of them are beginning to fear for their lives and that’s exactly what the left wants. They want to intimidate them into silence. This will only get worse and in the end, someone is probably going to pay the ultimate price with their life. All for being a conservative and/or a Republican. The radicals feel this is their time and their best chance to burn it all down. They feel they have to break a few Republican eggs to make a communist omelet.

The protesters you are seeing at these town halls and in the streets are plants by the left. Many, but not all, are paid and brought in to cause chaos and upheaval. Not only are Republican politicians getting threatening phone calls and notes, they are physically accosted at these town halls and outside of them as well. Republicans and the FBI are taking the death threats very seriously and they should. These people are very, very dangerous. 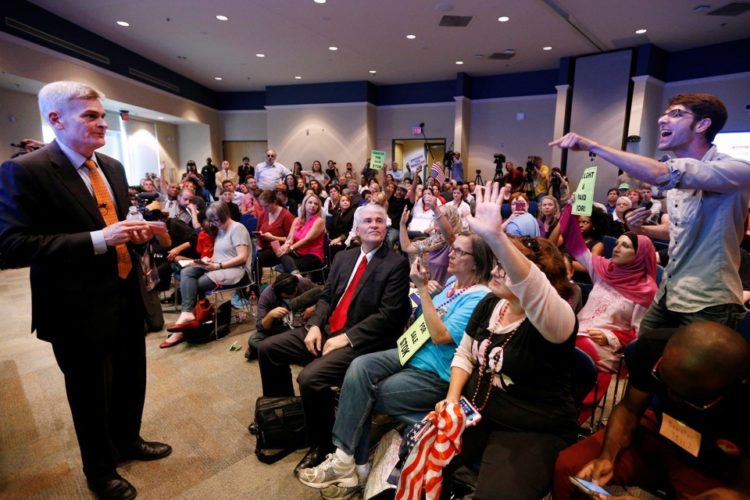 Republican lawmakers are fearing for their lives, and Democrats are doing little to quell the flames — in fact, they’re stoking the fires.

#Republicans[3] fearing for their safety as anger, threats mount from #Liberal[4] #Hillary[5] supporters and #Leftists[6].https://t.co/EU2Jwjcqgz[7] pic.twitter.com/N4PiWfYd7u[8]

Last week we reported that Wendi Wright, an unhinged liberal[10], chased down a Tennessee congressman after a town hall meeting. She eventually blocked him from leaving a driveway, screamed at and reached inside toward him and pounded on the car.

But Wright’s just one of a growing number of people who have waged similar threats and attacks against Republicans and conservatives.

Others include the FBI arrest of a man threatening the life of Rep. Martha McSally, a Republican from Arizona, and heightened security initiated by Rep. Tom Garrett, after the Virginia Republican received death threats, according to The Hill[14].

At the core of the rancor and unrest are the very policies upon which President Trump campaigned and was elected, and Clinton supporters refuse to let it go.

At the very least, almost all Republicans are now shouted down at events. Gone are the days of debate and discussion. Now, all out fights are being instigated by all ages. Most are claiming outrage over Obamacare. The backers of these trolls include George Soros, Barack Obama and Hillary ‘Resist’ Clinton. And it’s not just Obamacare. Rep. David Brat described being shouted down at an event after he mentioned everyone’s “God-given rights.” “They booed God. They booed the pastor. They booed the prayer. They booed the name of the church. They booed when I said rights come from God,” the Virginia Republican told The Hill. “That’s a fundamental tenet of western civilization. I mean, I didn’t think that was partisan.”

GOP Rep. Tom MacArthur was shouted down and booed when he mentioned the sad passing of his 11 year-old daughter. These people have no empathy or soul. Americans are urging the Republicans to keep fighting and not to be scared off or cowed. This is a war and we dare not back down. And it’s just getting started… more festivities to come unfortunately.

GOP rep interrupted with shouts of ‘shame!’ as he tries to relay story of his deceased 11-yr-old daughter https://t.co/rjLWiwaAZJ[15]

The only ones that are angry are liberals who are putting out lies, after lies to make the President look bad! When the media starts

Putting out the truth, then all those angry groups will stop! The President is trying to repair the country & the world that Obama damaged