GOP Pres. Candidate Ben Carson: ‘The Heart of the Matter is Not Guns’

After the crime in Charleston (I’ll never call it a “tragedy” because it is a crime, not a “tragedy”), GOP candidate for president Dr. Ben Carson is now out there saying that the problem in America isn’t guns, it’s our hearts. 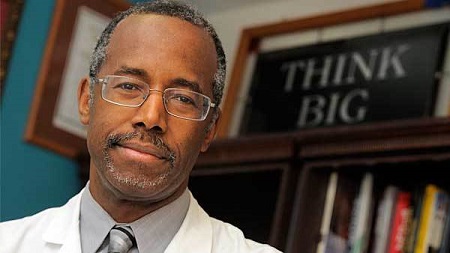 “The heart of the matter is not guns,” Carson said.

“The heart of the matter is the heart,” he said, “the heart and soul of people.”

“You know, this young man didn’t wake up yesterday and suddenly turn into a maniac,” Carson said of Dylann Storm Roof, 21, the suspect in Wednesday night’s shooting.

“Clearly, there have been things in his background, in his upbringing that led to the type of mentality that would allow him to do something like this,” he added.

“And one of the things that I think that we really need to start concentrating on in this country is once again instilling the right kinds of values, particularly in our young people.”

Carson went on to say that the political environment is becoming toxic giving people “a license to hate.”

“You know, we have a war on women, race wars, income wars, age wars, religious wars. Anything you could imagine, we have a war on it,” he said. “And we’re giving people a license to hate people who disagree with them.”

“Well, I hope that we, the American people, can come to the understanding that we are not each other’s enemies,” Carson added.

“The enemies are those who are stoking the flames of division, trying to divide us into every category and weakening us as a society.”

Well, what do you think? Is Carson onto something here?