Gosh Darn it… The Assoc. Press is all Mad at Me (Update on NJ School Cross-Dressing Day)

I hate it when the Old Media gets all mad at me, and stuff. But, here is the vaunted AP scolding me[1] for “skewering” a grade school over the story of the canceled cross-dressing day that was to be held at the Maude Wilkins School in New Jersey.

On the morning of April 12 I came across a story posted on my FaceBook page by an incensed mother of a grade school boy from the Maude Wilkins grade school. She was upset that her school had planned an event for women’s history month wherein students would come to school dressed as a famous woman from history, or dressed in representative historical women’s fashion from American history… yes, they even expected the boys to dress as women.

Later that day I wrote my treatment[2] of the event and off to the races we went. As it happened it wasn’t long before the pressure that the school felt over the ridiculous cross-dressing day caused Principal Beth F. Norica to cancel the event.

I duly posted an update and also posted the images of the two letters from the school, the one announcing the day and the one canceling the day.

But, the AP got all miffed at me because I “skewered the school.”

Janine Giandomenico, a mother of a boy in the class and a frequent user of online social networks, posted a complaint on Facebook. By Monday, her concerns had worked their way to Warner Todd Huston, an opinion writer and editor of the Publius’ Forum site.

He skewered the school and suggested that the timing of the event, scheduled for Friday, was designed to coincide with a national “Day of Silence” to protest harassment of gays.

“Pushing the gay agenda while feminizing our young boys through a cross-dressing day? This isn’t your parent’s grade school celebration, for sure,” he wrote.

Still, the AP did report that the initial letter home was easily “misunderstood.” Or at least the AP quoted Superintendent Michael Livengood to that effect.

“In hindsight,” Superintendent Michael Livengood said Wednesday, “maybe a different activity could have been chosen that was a little bit more relevant to history.”

… Livengood, who leads the Maple Shade Township school district, acknowledged that the initial letter could be misunderstood.

Me, I still maintain that it wasn’t easy to “misunderstand.” It seems pretty clear that they intended to have boys dress up as women, too. There is nothing in the letter excluding boys from the dress-up day. But, you read this letter (see below) and you tell me.

It is also a bit amusing that the school claimed not to know of the “day of silence” being pushed by the gay advocacy group GLSEN. But, it is what it is. All I can say is that this was a nationally known effort that many schools across the country are observing.

The good thing is that all the pressure got the school to cancel the cross-dressing day. That is the important thing here.

Finally, I’d like to point out how this illustrates the power of speaking up in this day and age. My posts and the voices of a few parents were able to alter a bad policy. This shows the efficacy of speaking out. The left has known this truth for decades and only now are the folks of the American center-right, the great bulk of our American polity, coming to understand the power of this simple, but important tool.

Move over Saul Alinsky, conservatives have learned your methods. 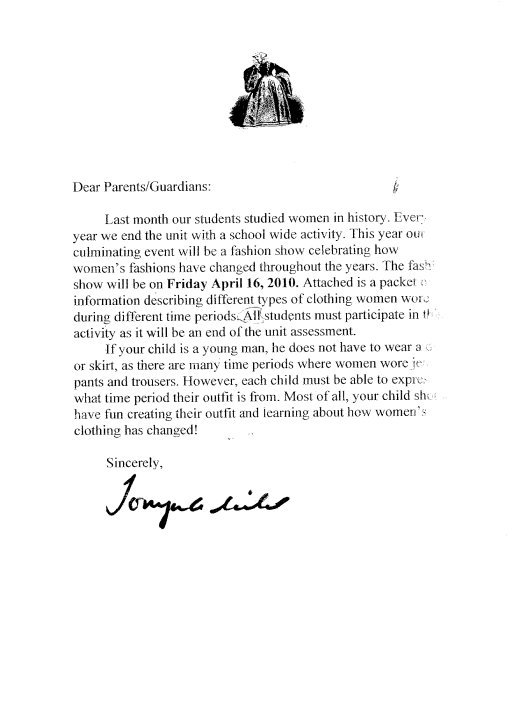