Government bullies S&P to punish them for doing their job

It comes as no surprise that the former US Secretary of the Treasury, Tim Geithner (close buddy to Barack Obama), tried to bully S&P’s parent company chairman of McGraw-Hill Financial Inc, for its 2011 decision to strip the United States of its coveted “triple-A” rating.[1] 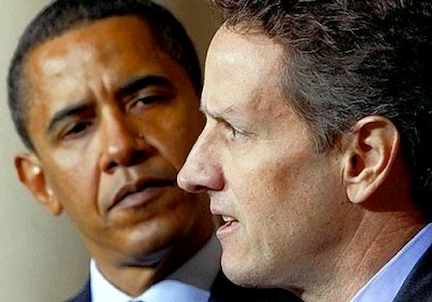 Jan 21 (Reuters) – Former U.S. Treasury Secretary Timothy Geithner angrily warned the chairman of Standard & Poor’s parent that the rating agency would be held accountable for its 2011 decision to strip the United States of its coveted “triple-A” rating, a new court filing shows.

Harold McGraw, the chairman of McGraw-Hill Financial Inc , made the statement in a declaration filed by S&P on Monday, as it defends against the government’s $5 billion fraud lawsuit over its rating practices prior to the 2008 financial crisis.

McGraw said he returned a call from Geithner on Aug. 8, 2011, three days after S&P cut the U.S. credit rating to “AA-plus,” and that Geithner told him “you are accountable” for an alleged “huge error” in S&P’s work.

“He said that ‘you have done an enormous disservice to yourselves and to your country,'” and that S&P’s conduct would be “looked at very carefully,” McGraw said. “Such behavior could not occur, he said, without a response from the government.”

The US Department of Justice’s $5 billion fraud lawsuit: is the: type of bullying: message that Don Corleone: would send for: going “outside the family”. Forget about worrying if your child faces bullies at: school, just think: about the gangsters: American business is facing in the office when dealing with the US Government.

If you think the government is a bully: check out their hitmen:

5 Reasons Unions Are Bad For America[3]