Obviously, this is the work of the TEA Party/Conservatives

Both Santa Ana police and Gov. Jerry Brown’s security detail[1] on Friday are trying find out who wrote graffiti on two walls threatening to kill the new governor on Valentine’s Day.

The graffiti, which threatened the governor and included a Nazi swastika, was discovered Thursday and is considered a “terrorist threat.” Authorities are also probing any links to earlier graffiti in the area threating to kill Catholics.

One of the scrawls said, “We gonna kill Gov. Brown 2/14/11,” and was discovered by a resident about 7 a.m. on a block wall on South Greenville Street near Alton Avenue, Bertagna said. The threat was sprayed with black paint.

Later in the day, a Santa Ana police officer spotted the second message on a block wall on Segerstrom Avenue. Painted in red, it said, “26 more days 4 Brown.” A swastika was painted next to it, Bertagna said. 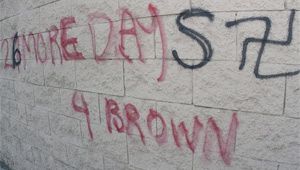 Gotta love how they immediately label it a “terrorist threat,” rather than a criminal one, which would make sense in Los Angeles. But, no

Rob: You know this was a Republican or Tea Party person who wrote this

Peter: Odd that Santa Ana, an 80-90% Hispanic immigrant city with a large latino gang problem, displays death threats against Gov Brown using a swastika. I wonder if the Santa Ana latino gangs are mad at Brown because he is cutting down/cutting off welfare handouts to the large impoverished Hispanic immigrant community in SA. I do not think there is one Hitler worshipper nor white power advocate skin head individual in entire city of SA, and that the latino gangs are using the swastika as a diversionary white power symbol to deflect Police investigations. Just a theory

In fact, it wasn’t an actual swastika, which turns the other way.

H Smith: Thats not a swastika, it’s an aztec symbol. The swawstika has arms in the oposite direction.

Conversely, it could have been miss-drawn by a moron. Still, all you Reich-wingers[2] are to blame, with Sarah Palin and Glenn Beck leading the way. Or something like that.