It’s Presidents Day and Chicago-based Groupon has some celebrating to do. In fact, this year they are celebrating that well-known president Alexander Hamilton.

Groupon made the announcement of their Presidents Day honoree in a February 14 press release[1].

“Starting tomorrow, Groupon will be kicking off Presidents Day weekend by giving customers 10 dollars off 40 dollars when they purchase a deal for any local business. The $10 bill, as everyone knows, features President Alexander Hamilton–undeniably one of our greatest presidents and most widely recognized for establishing the country’s financial system.”

Of course, anyone with a fifth grade education knows that Alexander Hamilton was never elected to the Presidency. He wanted to be, no doubt, but he ran into a smear campaign over a sexual indiscretion he engaged in that became a major embarrassment to him.

Ultimately he got shot by Vice President Aaron Burr in a duel over a slight.

But he was never a president quite despite what Groupon thought.

Once again we can thank our liberal education establishment for educating America. 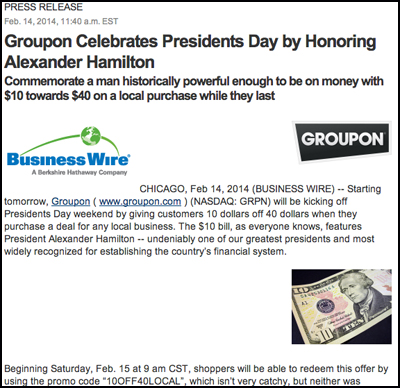