A Jackson, Mississippi man[1] who owns a gun store has put up two signs… he won’t sell guns to Democrats or terrorists. I guess he doesn’t see much of a difference between the two and I have to agree with that. I actually find his signs refreshingly candid and funny. CNN-affiliate WAPT spoke with the gun seller, Tim Wolverton, about the “controversial” signs. Wolverton said at first he posted the signs as a joke, but now things have gotten a little more serious. “Well, it kind of started off as a joke… But of course so is Kenneth Stokes,” said Wolverton. Yes, they have and he is. 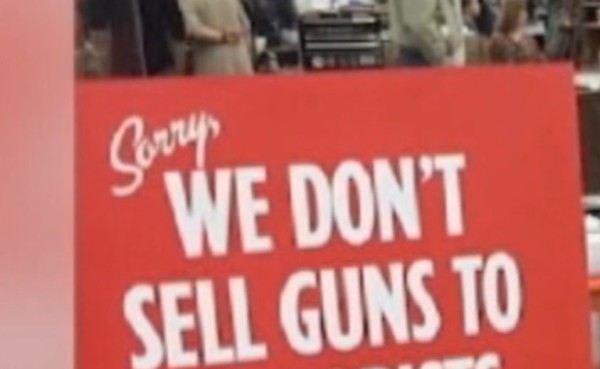 A Jackson, Mississippi gun store owner has stirred up some controversy over two signs he’s posted making clear who he will NOT sell a gun to: terrorists and Democrats.

“We don’t sell guns to terrorists or Democrats! It’s too hard to the tell the difference!” one sign declares.

“If you voted for Kenneth Stokes or Barack Obama you’re too stupid to own a gun. Please find another dealer,” reads the other.

This man’s local Democratic politicians have likened gun dealers to terrorists, hoodlums and thugs. Those idiots should take a long, hard look in the mirror. This same local councilman, Kenneth Stokes, told people to throw rocks at police who were pursuing suspects. That guy needs to go. I congratulate Tim Wolverton on his signs. I’d be honored to know him and shake his hand. Truth in advertising folks. It hurts. 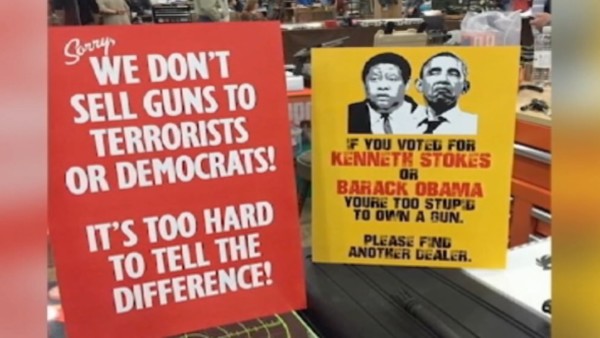