Harry Reid is mentally unbalanced and morally bankrupt.[1] After a court once again blocked Obama’s Amnesty scheme, Reid pitched a fit on Twitter taking aim at Donald Trump and Ben Carson. He claimed the ruling was politically motivated and vowed it would go to the Supreme Court. I pray that it goes our way there, but we are one justice away from not having a prayer on the conservative, constitutional side. Even as the court is now, there is a lot of doubt that conservatives will prevail on this. Reid ranted that Trump and Carson were leading the Republicans down the wrong path and off a cliff. No… they are pulling us back from the edge of the precipice Marxists were getting ready to push us off of into the void. Reid screams like demon denied. 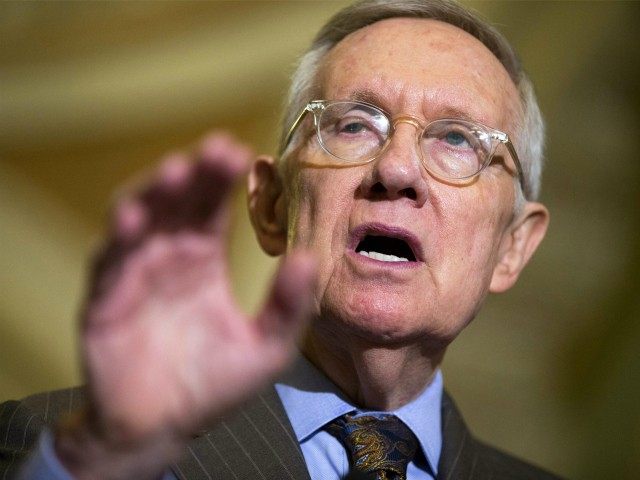 In a Twitter rant, Reid argued Tuesday morning that the ruling was politically motivated and, further, that Republican presidential candidates Donald Trump and Ben Carson are leading the GOP down the wrong path.

“The Fifth Circuit’s decision yesterday was a political move that ignores past precedents on executive action on immigration,” Reid began.

“Yesterday’s decision affects millions of families who now could be torn apart. As Judge [Carolyn] King stated in dissent, ‘a mistake has been made,’” he continued.

Reid continued, attacking the GOP for following Trump and Carson on immigration.

“The Republican Party has neglected the lessons of the 2012 elections and have plunged over a cliff following the lead of Trump and Carson,” he said.

He concluded by asserting that the administration’s appeal to the Supreme Court will be successful.

“I expect the Administration will swiftly appeal this decision to the Supreme Court, and I believe the Court will find the actions lawful,” he tweeted.

The Justice Department Tuesday announced[3] that it would be taking an appeal to the Supreme Court.

I hate to break it to Dirty Harry, but unconstitutional precedent set on unlawful executive actions will not stand up under constitutional law. This doesn’t tear families apart. In fact, if Trump is elected, he’ll keep them together as he deports them back where they came from. They can come back legally or not at all. What this does is screw up the Democrats rigged voting scheme. Tsk, tsk, Harry… we did indeed learn our lesson from the 2012 elections. Never again takes on a whole new meaning. No more Marxists. We want our country and sovereignty back. We want you and the rest of the commies gone. Your time is drawing to a close and your evil howls of frustration are pointless. By the way, Nevada doesn’t want you either, Harry. 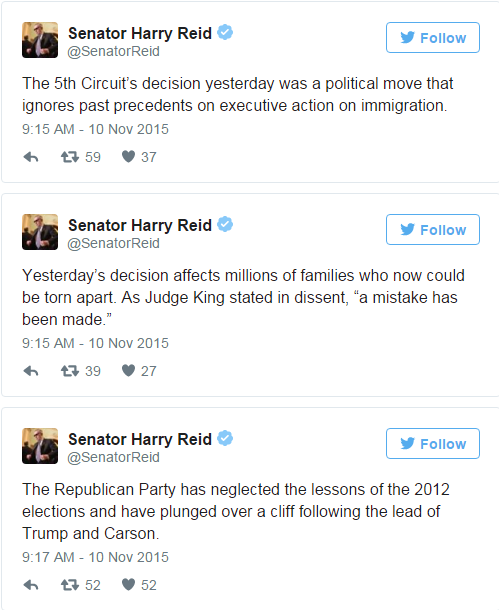