For one brief[1], fleeting minute there, I thought Al Franken was going to do something, well, human. Not so fast. He was being interviewed by Jake Tapper about Betsy DeVos. The first mistake I noticed was that Tapper claimed it was teachers protesting DeVos at that DC school. They may have been part of it, but I noticed he didn’t mention those holding Black Lives Matter posters or the teacher’s union. Tsk, tsk, Jake… no brownie points for you today.

Then Franken was asked if he thought DeVos should have the right to go into a public school. This, right here, is why I despise Al Franken: “Yes, and it would have been her first time ever in a public school,” Franken said, in an apparent swipe at DeVos for her critical stance on the public education system. Then he said he was joking. Right.

“No, she should be able, she should be able to do her job,” Franken continued. “They should not prevent her from doing her job that way.” Of course, then Franken said that DeVos was the least qualified nominee he has ever seen, but added that he is eager to work with her since she is the current Secretary of Education. What an asshat. 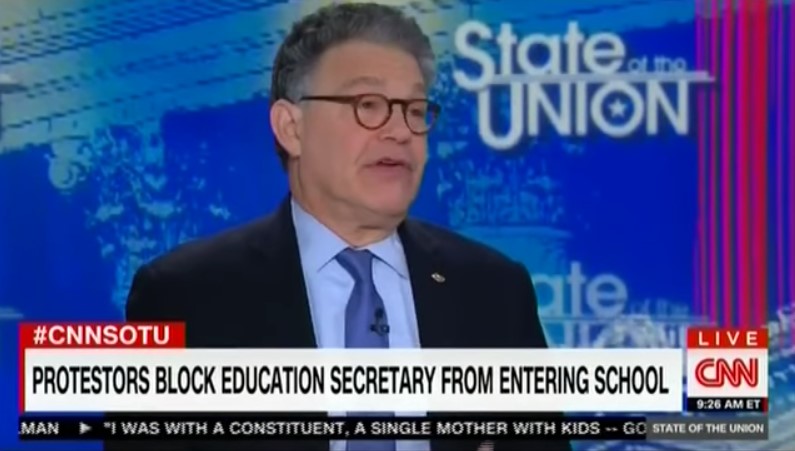 Sen. Al Franken (D., Minn.) said Sunday on CNN’s “State of the Union” that Secretary of Education Betsy DeVos should not have been blocked from entering a Washington, D.C. public school by protesters.

DeVos attempted on Friday to enter Jefferson Middle School Academy in D.C., but protesters blocked[3] the steps, preventing her from going into the school. The newly confirmed secretary of education was escorted by her security team into her car and eventually make it into the school for a scheduled event.

Franken, who vocally opposed[4] DeVos’ nomination, told CNN host Jake Tapper on Sunday that she should have been allowed to enter.

“I know you opposed her and you don’t think that she is going to be a good secretary of education, but shouldn’t she have the right to walk into a D.C. public school?” Tapper asked. “Shouldn’t that be something that we embrace?”

“Yes, and it would have been her first time ever in a public school,” Franken said, in an apparent swipe at DeVos for her critical stance on the public education system.

“Is that true?” Tapper asked.

“No, I don’t know,” Franken responded.

DeVos was blocked from entering a school last Friday to speak there in DC. Protesters kept her from entering and then started shouting, “Shame!, Shame!, Shame!” at her. They tried to block her car from leaving, but failed at that. You could hear them saying that they would never quit doing this and Black Lives Matter activists were definitely there.

DeVos is absolutely qualified to be the Secretary of Education regardless of what Franken says. He’s a bloody Marxist and you can’t believe a word he says. Protesters can be heard in the video screaming that DeVos gave money to senators so that she could buy her position to head the Department of Education. That is an outrageous lie and shows how much the left fears DeVos. Franken may be a Harvard Democrat, but he’s dumb as a box of rocks. He only grudgingly said DeVos should be allowed to enter that building because he knows as a Senator he had to say that, or be accused of incitement and flaunting the Constitution. I’m sure that DeVos does not look forward to working with Franken.

Sec. DeVos physically blocked by protesters from entering DC school–turned away and left. Unclear if she attempted another door. @ABC7News[5] pic.twitter.com/buNgmOJbya[6]