This is the sort of mentally disturbed whackjobs that pass for “professors” in our system of miseducation. A racist woman who just departed from the University of Memphis with her racist attitude biting at her heels has also blamed her menstrual problems on “microaggressions” she claims to get from white people. No, really! 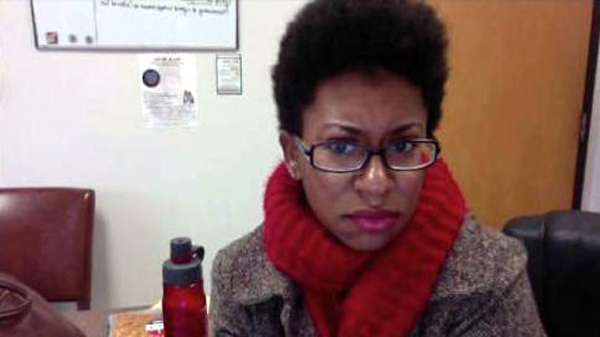 Professor Zandria Robinson of the UofM “African Studies Dept.”–another one of those fake fields of study infesting our universities–was thought to have been fired when her years of racist comments and Tweets were revealed to the public.

Not only had Robinson idiotically said[1] that all riots in America (including Ferguson and Baltimore) were started by white people but now we find out she even blamed her cycle on white people.

Robinson’s blistering anti-white statements first drew widespread attention thanks to reporting by the website Campus Reform. On Tuesday, Memphis distanced itself from Robinson, saying she was no long employed there and deleting her profile page. Initially there were rumors Memphis had fired Robinson for her tweets, but it turns out Robinson has simply left the school for a new position over at Rhodes College

Robinson has belatedly made her Twitter feed private, but Thursday Campus Reform published screenshots of several older tweets on her account that show a persistent pattern of hating whites, Christians, and even other blacks.

In one particularly strange pair of tweets made in March, Robinson admitted to having severe premenstrual dysphoric disorder (PMDD), a condition characterized by emotional and mood problems. Due to her difficulty treating it, Robinson theorized her menstrual mood swings may simply have been caused by white people rather than any internal hormonal fluctuations

This hate-filled creep also Tweeted how she hates Christians and black conservatives whom she calls “self-hating blacks.”

Don’t for a second imagine that this hate-filled “professor” is alone. She is one of MANY such haters in academe. This is the kind of garbage that our students are bombarded with every single day in nearly every classroom in America.