He ‘Doesn’t Deserve A Second Term’ 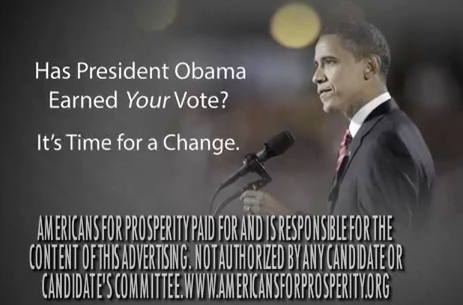 Americans For Prosperity’s new advocacy approach hit the airwaves with a vengeance on August 14th. : As I was watching Shark Week, I saw the ad and all I could think was how deep it cuts into Barack Obama’s record and his campaign mantra of : ‘hope and change.’ : Like the ad that: featured how ordinary Americans felt about their tax dollars going overseas to help foreign firms[2], this TV spot highlights the disappointments from former Obama supporters.

One woman said she thought he would being new jobs—not massive layoffs. : An older gentlemen displayed regret over his Obama vote, since he feels our current president is in the way of securing a better future for his grandchildren.

While they all still believe in hope and change and think Obama is a good person, these concerned citizens feel that he hasn’t earned a second term— nor does he embody the principles he represented four years ago.

It captures the exhaustion Americans have experienced with this president— who promised a new kind of politics and a bag of goodies to recipients of our bloated welfare state. : In the end, it’s the same old politics, cancerous crony capitalism, and a more dependent society supported by a decreasing tax base. : In addition, federal spending has run amok. With the economy in such a volatile position, AFP decided to become more aggressive and this ad surely demonstrates their seriousness in removing Obama from office. : The last thing AFP wants President Obama to do in office is update his resume.

This is all part of an ad blitz AFP is undertaking to keep the pressure on Obama and expose his failed record on the economy. : The first media spot featured Obama’s abject failure in tackling the national debt[3]. : While the latest slate of ads will cost around $27 million dollars, AFP is committed to spending close to $120 million on their media campaign to defeat the president.