Talk about biting the only political hand that would care about anything you say, but the so-called “black lives matter” group has denounced the Democrat National Committee for passing a resolution of support for the racist group at the DNC’s national meeting last weekend. 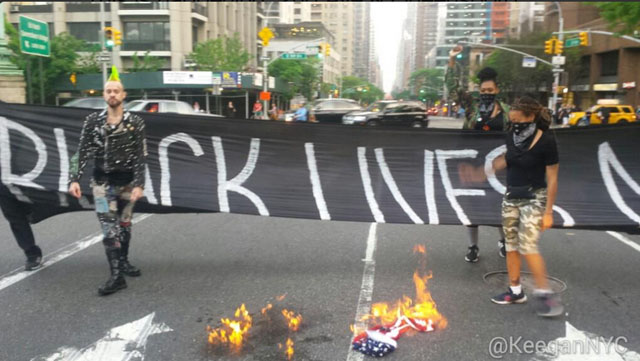 This group–which many charge is no less than the modern version of the KKK–is causing property damage and inspiring murders all across the country, but the fools at the Democrat National Committee passed a resolution anyway at its Summer meeting that voiced support for the racist group.

Activists with the Black Lives Matter movement rejected the Democratic Party’s recent statement of support, making clear that they are not affiliated with any political party.

“We do not now, nor have we ever, endorsed or affiliated with the Democratic Party, or with any party. The Democratic Party, like the Republican and all political parties, have historically attempted to control or contain Black people’s efforts to liberate ourselves,” the statement continues. “True change requires real struggle, and that struggle will be in the streets and led by the people, not by a political party.”

At its summer meeting on Friday, the DNC had passed a resolution affirming support for the goals of Black Lives Matter.

“[T]he DNC joins with Americans across the country in affirming ‘Black lives matter’ and the ‘say her name’ efforts to make visible the pain of our fellow and sister Americans as they condemn extrajudicial killings of unarmed African American men, women and children,” the resolution stated.

The Black Lives Matter Network said such a resolution wouldn’t do anything to “bring the changes we seek.”

“Resolutions without concrete change are just business as usual,” the network’s statement reads. “Promises are not policies.”

Of course, they are right to the point that resolutions are meaningless. But it’s still funny to see this racist group smacking down the only political side that would even waste time listening to their racist pap.

But I am not sure which is more pathetic. The anti-Americanism of the racist Black Lives Matter group, or the pandering to racist anti-Americans of the DNC?